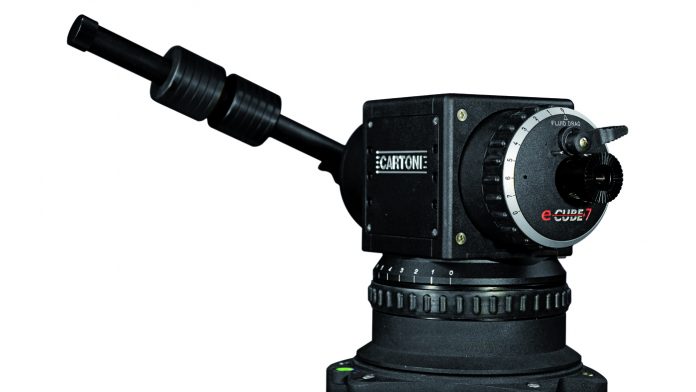 Professional camera support company CARTONI will be showcasing a number of new additions to their camera support product line. What you can expect to see at this year's NAB is a ensemble of new fluid heads, tripods, pedestals and remote devices.

Let's take a quick look at what those products are going to be:

CARTONI is bringing a new 75mm base SDS (Smart Deployment Series) tripod to the market after the success of its popular 100mm base released last year. This new SDS combines CARTONI’s Focus 8 fluid head, that holds payloads from 0 to 8 kg, and features the company’s SMART STOP two stage/single lever tripod and SMART LOCK mid-level spreader tech.

The SDS system is also supposed to be “super-fast to spread and collapse, making it a perfect choice for ENG, documentaries and other on-the-go shooting,” according to CARTONI.

CARTONI describes the E-REM as an “extremely smooth, reliable, silent, remote pan and title head” that has no backlash. It has a maximum payload of 25 kg and a variety of speed options ranging from a minimum 0.12 rpm and 0.7 °/sec to a maximum 120 rpm and 720°/sec. Its pan/tilt resolution is ix 800.000 c/t.

CARTONI’s new E-CUBE 7 is a performing encoded pan and tilt that that has 7 steps of drag in both pan and tilt. It features high resolution encoders with accuracy at 40.000 c/t.

“This fluid head acts as a sophisticated pan bar when connected to a remote head and is the ideal remote control for cameras on cranes, jibs and drones,” says CARTONI.

The E CUBE 7 can be supplied in three different options: with the CARTONI electronics to operate the CARTONI E-REM 25; with encoders only, transmitting position data to any OEM electronics or bare-bone Fluid Head accepting different encoders; and electronics in total OEM configuration.

CARTONI’s made an upgraded version of the FOCUS 22 and the head will now have both a Flat and 150mm bowl configuration. The head’s dual design is said to be compatible with many different popular pedestals and sliders, making it “ideal for rental houses and broadcast production environments that employ a variety of camera and support systems,” according to CARTONI. The improved FOCUS 22 base combines directly with 150mm tripods and pedestals and can support cameras ranging from 3 to 22 kg with CARTONI’s wing counterbalance.

The P70 Pedestal is also being upgraded to include steering wheels. The new version will have three sets of double individually-lockable wheels.

CARTONI will be showcasing all of these new products at NAB 2018, which opens its doors on Saturday, April 7th at the Las Vegas Convention Center and runs until Thursday, April 12th.