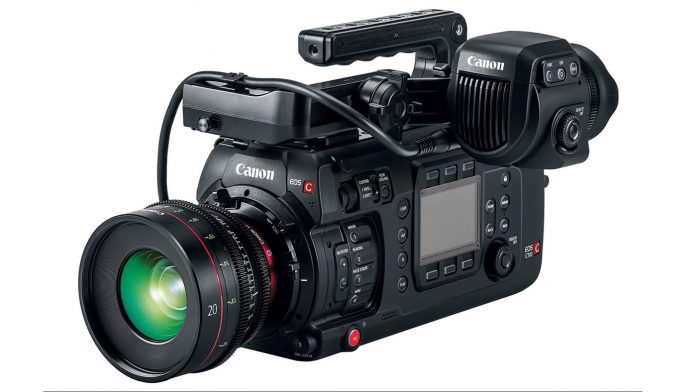 The EOS C700 FF may be Canon’s first full frame cinema camera, but that’s not stopping them from trying to get the attention of major Hollywood productions.

The sensor can shoot in 5.9K RAW, but you’ll need an external recorder

Its sensor also supports Super 35mm, Super 16mm and anamorphic modes. Canon says that the sensor size will allow for greater tonal range for colors and over 15 stops of dynamics range to greatly improve the contrast of images.

What about the recording formats?

Similar to other 4K Cinema EOS cameras, the EOS C70 FF uses CFast cards to capture video in either 4K or 2K. As mentioned above, the camera does oversample its image, downsampling its 5.9K image to 4K, which should increase image sharpness, lower moire and decrease noise at higher ISO levels.

The camera’s high-frame-rate recording mode shoots up to 168fps in 2K crop and the camera can either relay or simultaneous record onto both CFast cards. The C700 FF can also shoot at a Full HD high-frame-rate at a max of 168fps.

A feature that isn’t present in other cinema cameras, the EOS C700 FF supports Dual Pixel AF, which will offer continuous AF within about 80% of the camera’s image area. You can refer to the video below for a brief overview of Canon’s dual pixel autofocus feature.

The EOS C700 FF is being released alongside a 20mm Prime Lens and two 4K Reference displays.

To accompany the C700 FF at its launch, Canon is releasing the CN-E20mm t1.5 L F lens. The lens is fully manual and is built with a 11-blade and T1.5 aperture. Canon claims that the lens is perfect for 4K because it helps create warm and natural-looking tones.

Additionally, Canon will be releasing two 4K HDR reference displays, both for on-location video review. The 17-inch DP-V711 is the smaller of the two. Its companion display, the 24-inch DP-V2421, offers a bigger viewing screen. Both displays feature HDR and can transmit 4K 60fps footage for broadcasting.

The Canon EOS C700 FF is expected to be released in July, with the 20mm lens shipping this fall. The displays will be out next month. You can definitely also expect to see the C700 FF on display at NAB this year.

Head to Canon’s official site for more information about the EOS C700 FF.