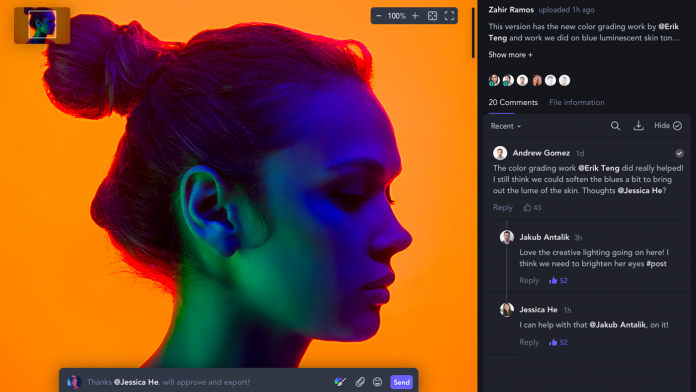 The team behind Frame.io, the workflow management platform for video teams, will be previewing the new Frame.io at this year’s NAB before its full release this summer.

The Frame.io team says that the new Frame.io has been reengineered for speed, now having the ability to load large projects up to “100X faster.” Additionally, there’s support for Gigabit speeds when uploading media. You can also expect broader media support, better version control, new commenting tools and a enhanced search tool.

Frame.io is reportedly getting over 150 new features and improvements, so here’s a brief overview of some of the major ones:

Faster speeds for the browser and uploader, with nested folder support during uploads

As said above, the new Frame.io will be up to one hundred times faster than its was previously thanks to a new media browser that Frame.io says enables users “to fly through thousands of assets at lightning speed.” The new sorting and search options make it easier for users to find what they are looking for a lot more quickly, according to Frame.io.

The new uploader will support speeds above 1 Gigabit and retain nested folder structures during those uploads.

Frame.io has given its core video playback a complete makeover. The new Rebuilt Core Video Playback Engine will allow for “faster and smoother video playback” with “less buffering, at up to 4K resolution” says Frame.io.

Comments on Frame.io now support attachment uploads and range-based feedback. This means that users can drag the comment handle over the timeline to create a range and “better reference” the underlying content.

Frame.io creators can new see who is currently watching their videos or see how many people have watched it in the past with clip history. Clip statistics can show users things like play counts historical views, and can even notify that user when a specific person or group of people begins to view your video. So if Videomaker starts watching one of your videos, you’ll know right away!

Other features and improvements

Frame.io will be showcasing the new Frame.io at NAB 2018 at the Western Digital booth (SL6316) in the South Lower Hall that the Las Vegas Convention Center. It’s expected that the new Framie.io will be released early this summer.

You can go to Frame.io’s official blog post about the new features coming to the platform.