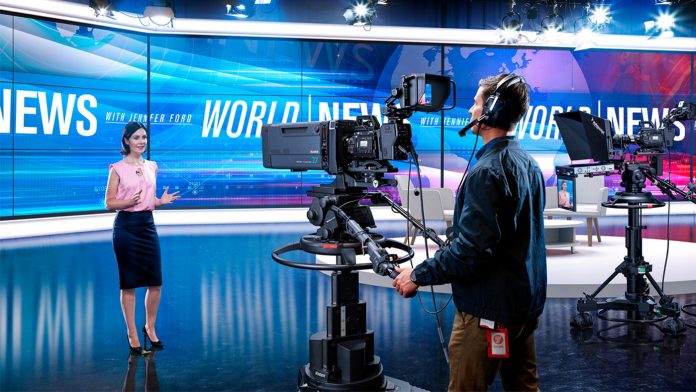 At Blackmagic Design's product release yesterday, they put HD and UHD affordability at the utmost forefront and unveiled the URSA Broadcast camcorder. For a significantly low $3,395, the URSA Broadcast is a professional 4K camera begging to be the camera of choice for both live and studio productions.

One of the big key features the Blackmagic highlighted for the URSA Broadcast is its overall flexibility. For instance, the camera is compatible with older B4 HD lenses and even inexpensive photo lenses. Broadcasters will likely appreciate that the camera is flexible to their needs, allowing them to keep the lenses that they like and are used to if they want.

And whether you’re out in the field shooting a live news broadcast or broadcasting from a studio, Blackmagic says that the URSA Broadcast has got you covered because of its compact, tough design along with its built-in color grading capabilities and overal image quality.

“Whether you’re in the studio or out in the field, URSA Broadcast will give you incredible image quality, accurate skin tones and vibrant colors that are far superior to cameras costing ten times more,” Blackmagic says.

What about the sensor?

As said before, the URSA Broadcast uses a 4K image sensor that’s designed to capture images with a wide depth of field in both HD and 4K UHD.

“The image sensor is designed for both HD and Ultra HD so you get amazing texture and detail, accurate skin tones, vibrant color and high dynamic range video, all without the need for post production,” says Blackmagic.

If you find yourself shooting on a very sunny day that’s leaving your image blown out, the URSA Broadcast has neutral density filters to decrease the amount of light hitting the camera’s sensor, making proper exposure easier.

The filters include 1/4, 1/16th and 1/64th stop filters and you can switch them pretty quickly when having the filter dial turned on.

The camera’s been designed with a “super strong, lightweight” magnesium alloy body that’s should be easy to hold and carry out in the field. It features externally mounted mechanical switches and controls, like traditional broadcast cameras

There’s as a 4-inch fold out touchscreen for monitoring and controlling the camera.

The URSA Broadcast is available now for just  $3,395, which is a price point closer to a DSLR than a interchangeable-lens studio or live production camera. You can learn more at blackmagicdesign.com.