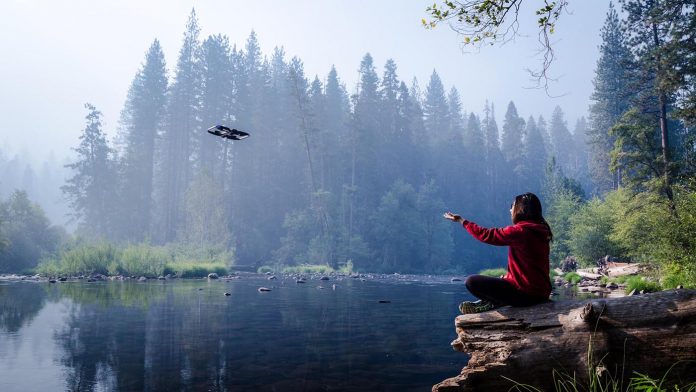 The drone startup Skydio has been working on their R1 drone for a while now — about four years — but today they finally unveiled the R1 and it looks to be quite a feat for this startup. The R1 is a 4K quadcopter that is completely AI-operated. That means that the R1 is able to shoot 4K video and navigate itself through complex environments without needing you to control it. The R1 doesn’t even come with a controller! Skydio is confident that the R1 can operate itself in every situation that it can be put in, meaning that it’s the first professional-level drone that can be used without any prior drone flying experience.

The R1’s got 13 onboard cameras that do real-time mapping, path planning, and obstacle avoidance on its own. For its onboard processing, the R1 uses a Nvidia Jetson TX1 computer often used as the brain for self-driving car prototypes.

The software for the R1is able to organize all of the data its processing with built-in algorithms that Skydio has trained to be able to identify humans and things like trees or cars, allowing it to avoid dangerous environmental obstacles and home in on the subjects that it should be recording.

The R1 comes with a battery that lasts up to 16 minutes on a single charge, which matches DJI’s Spark battery, and it comes with 64GB of onboard storage.

How do You Control it?

Since the R1 doesn’t come with any kind of controller, all the controls for the R1 are operated through Skydio’s mobile app, which manages things like the launching and landing of the R1. The app also allows you to see previews of the video it’s shooting and also put on presets like “orb,” which calls for the R1 to take 360 shots, or “lead,” which makes the R1 capture the front of the subject while staying in front.

There is a manual flying mode in the app as well, if you prefer to fly drones yourself, but the drone’s safety obstacle avoidance system will remain on — you can’t fly the R1 into a tree even if you wanted to. Controlling the R1 manually is simple; there are on-screen vertical sliders and a virtual direction pad that can move the drone forward and backward and also rotate it left and right.

Nick Statt, from The Verge, was able to see the R1 in a demo in San Francisco yesterday and was amazed at how easy it was for the R1 to recognize him and how well it maneuvered itself in the air:

“The R1 had never seen this particular environment, nor had it ever laid eyes on me, yet within seconds it was following me around as well as I tried to crash it into tree trunks and random branches. All [CEO Adam Bry] had to do was tap the image of me on the live feed in the Skydio mobile app, and the R1 picked up on my presence. Bry says that the R1 takes into account visual data — like the blue color of the jacket I was wearing — to improve its tracking in real-time, allowing it to better keep track of subjects that are in dense, object-rich environments.”

The Skydio R1 is available now for 2,499 dollars, which is a little questionable when you look at other drones like the 2,999 dollars Inspire 2 and 1,499 dollar Phantom 4 Pro, which both beat the R1 in a number of technical ways. The Inspire 2 shoots up to 5K resolutions and its battery lasts twice as long. But Skydio is confident that the R1 has something that not even DJI can compete with: the R1’s ability to operate itself. They stress that their ultimate goal is to not compete with big companies like DJI, but to bring quality drone video to the general public that hasn’t had prior experience using a drone.

To learn more about the R1, visit Skydio’s website.