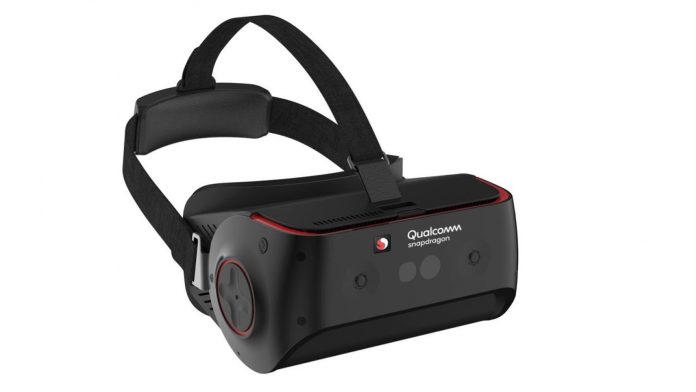 Qualcomm’s released a new reference design for a VR headset that is built for to the company’s newest Snapdragon Mobile VR platform. The system is reported to work with the Snapdragon 845, Qualcomm's latest premium mobile chipset, and will add features like foveated rendering and room-scale tracking.

The benefits of the Snapdragon 854 include, according to Qualcomm, 30 percent faster operation and 30 percent less power consumption, and, as Qualcomm puts it, “more than twice as much display throughput compared to the Snapdragon 850 mobile platform.” That means the chip can power both of the headset’s dual 2K screen simultaneously.

The Snapdragon 854 headset has the capabilities of displaying two 1024 x 1152 pixel screens at 120fps. When compared to other headsets out on the market, those specs probably won’t be turning any heads. For instance, HTC’s Vive Pro offers 1400 x 1600 per eye.

Qualcomm's Snapdragon 845 headset tracks your eyes so it can render certain areas with a higher resolution.

The headset does incorporate foveated rendering. This feature acts an an eye tracker that figures out where your eyes are most focused so it can lower the resolution of the peripheral vision areas and keep areas your eye do focus on in a higher resolution. Why does it do this? It’s so the device can improve its overall performance by spending more power only in the places it needs to and to ultimately save power compared to headsets without foveated rendering.

Roomscale tracking helps keep you from bumbing into things.

As for the headset’s Roomscale tracking feature, it uses inside-out 6-DoF (degrees of freedom) racking with SLAM (simultaneous localization and mapping) to follow where you are in the room. This is helpful in that it can keep you from crashing into things while your immersed in VR.

The Snapdragon 845 has a number of processor updates:

Additionally, Qualcomm says that the headset can deliver up to four million pixel per eye and supports 3D audio.

The Snapdragon 845 headset will be on display at MWC (Mobile World Congress) next week.