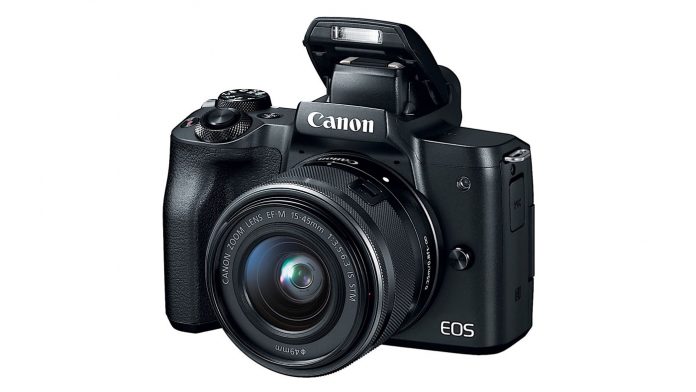 When Canon added the EOS M5 to their mirrorless M line in late 2016, it seemed like Canon was reaching out to their videographer fanbase. Though the M5 had features like Canon’s popular Dual Pixel CMOS autofocus and 5-axis digital image stabilization, it didn’t have support for 4K. That’s been an ongoing criticism for Canon. They’ve only included 4K support in their high-end DSLRs and have left everything else 4K-less. However, that is about to change, because Canon’s just announced their first ever Ultra HD 4K mirrorless camera, the EOS M50.

The M50 seems to be a lot like the M5, just with a simpler design with fewer dials and buttons. The M50 sports a 24.1-megapixel APS-C sensor that's slightly smaller than the M5’s 24.2-megapixel sensor, but Canon still claims that the M50 sensor captures better images in low light. It’s ISO range is 100-25,600, and is expandable to 51,200 max. Canon attributes the M50 low light performance to Canon’s new image processor, the DIGIC 8.

The M50 is the first camera to use Canon's DIGIC 8.

Additionally, the DIGIC 8 processor creates a new raw file format. Raw images will be saved as .CR3 file extensions on the M50. Neither he M-RAW nor S-Raw options are featured on the camera. They were file formats that took up less space than full RAW files because they were lower-resolution. Canon has added a replacement for these options called “C-RAW,” which is a RAW file with the same resolution as M-RAW, but which fills 60 percent less space.

The M50 uses 3-times more Autofocus Points than the M5.

The M50 has the same built-in viewfinder that the M5 has, and it’s got the same touch and drag capability, too, which lets you move the autofocus points while you’re looking through the viewfinder. However, the M50 has a lot more focus points than the M5. It has 143 points, while the M5 has just 49. However, with some lenses only 99 AF points with be active, meaning that only particular lenses will be able to use all the camera’s 143 AF points.

The M50 does uses Canon’s Dual Pixel CMOS AF and a new “eye detection AF” that automatically locks focus to a subject’s eyes, so it doesn’t seem like being handicapped to 99 AF points will be a huge problem.

The M50 can shoot 4K, but there are a few catches.

While one of the big features for the M50 is its 4K capabilities, it comes with a 1.6X crop. That’s an additional crop to the already in place 1.6X APS-C crop factor.

Also, you can’t the use phase-detection Dual Pixel AF in 4K. The feature is only usable in 1080p video or lower. What you do get when you use 4K is contrast-detection AF. Additionally, there’s no in-body optical stabilization.

The M50 has built-in Wi-Fi, Bluetooth and NFC connectivity and can instantly upload all the photos you take on the M50 to your phone when the camera is connected to the Canon mobile app. It can send either compressed or full resolution JPEG files.

And in light of the M50’s announcement, many have wondering why they would pay more for a more expensive model, like the M5, if the M50 is already seeming so similar and offers more desirable features, like 4K video shooting. So in response, Canon has dropped the M5’s prices from 980 dollars to 930 dollars and also have dropped the M6’s prices from 780 bucks to 680 bucks. The price drops may be only temporary however.

To read the full press release for the M50, head to usa.canon.com.