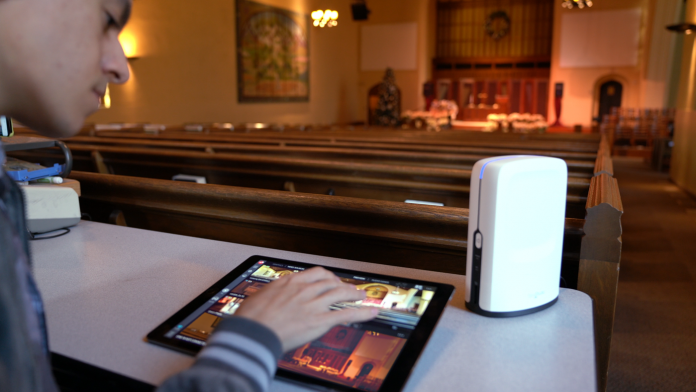 Videomaker Editors reviewed SlingStudio recently and since then, it has had a major update expanding its capabilities. There are four aspects to this update. First is the ability to upgrade HD streams to 4k in post-production. Next is the power to import pre-made video to use within a stream. Additionally, you can now adjust audio delay manually. Lastly, there is an improved workflow for importing graphics.

SlingStudio is a new streaming solution for multi-camera switching from an iPad. You may know Sling Media as Dish Network’s subsidiary that introduced the Slingbox that allows you to watch TV on your mobile device. With SlingStudio, you can pair a camera wirelessly to a hub where you switch live with an iPad. The new update expands its capability and is a free upgrade.

SlingStudio can stream wirelessly using SlingStudio’s CameraLink that connects to your existing camera via HDMI. This means you can take cables out of the equation and simplify the process. SlingStudio allows for live streaming off a battery requiring no onsite power, making more remote locations possible. There’s no need to search for a power outlet; batteries will power everything. Plus, you can use a wired camera, a wireless signal or a phone as an input device using SlingStudio’s Capture App.

Update 3 was released in November and contains plug-in support for Adobe Premiere Pro and Final Cut Pro X using SlingStudio Premiere Extension and the Final Cut Pro Converter. These plugins allow SlingStudio’s live capture to be used as a proxy. That proxy is then used to sync with a higher bit rate or high-resolution footage captured natively within each camera. Now synced, you can swap out HD footage for native 4k footage that was recorded with a camera.

Additionally, all graphics and cuts are automatically imported and applied from your live switch. That means they don’t require any re-editing. Although a stream was recorded in HD, you can upgrade it to 4K after the fact. Moreover, you can improve your cut from the one done live, tightening up edits and timing after the stream for the best product possible.

The update gives SlingStudio the capability to use pre-recorded video for pre-roll, post-roll, ads and bumpers just to name a few. When using pre-recorded video it doesn't use up any of the four switchable video sources. This allows you to take your stream to the next level with improved production value. Run a show open, cut to pre-made video, or run ads within the program with this new feature. Regardless of the format, every stream would benefit from being able to queue up and insert video during the stream.

When streaming, audio sync can be difficult to fix if it's off at all. This new update allows adjustment of the audio delay up to 330 milliseconds. This feature can be helpful when using an HDMI-connected camera that has a built-in delay. You can now fix audio delay and avoid lost viewers because the audio is off.

This update gives the choice to save imported graphics internally, improving your workflow for graphic imports. No longer will graphics be copied automatically to  SlingStudio Hub’s internal storage. This can free up valuable storage space or can allow for all necessary resources to be in one place.

Update 3 for SlingStudio is now available, works with all SlingStudio Products and you can download it here.