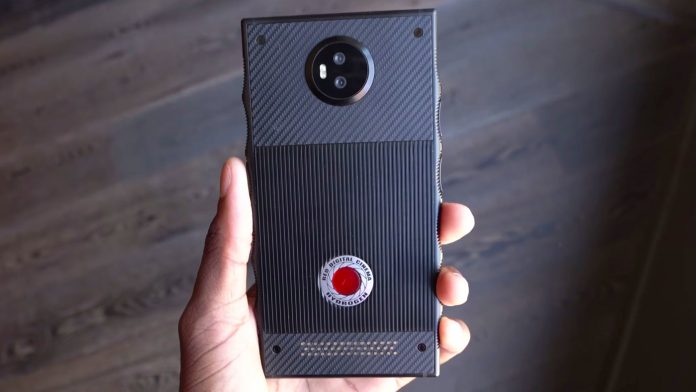 RED’s treading on highly unfamiliar ground — for both the company and the entire smartphone industry — with their very first smartphone: the fiercely anticipated Hydrogen One. If you don’t already know, the Hydrogen One is slated to feature a 3D “holographic display” of RED’s own creation and is priced with a hefty starting price tag of $1195.

RED started taking preorders for the Hydrogen One half a year ago, without giving even a slight time window of when the phone would actually be released. Luckily now we know, after RED CEO and Founder Jim Jannard posted an updated on RED’s forum, that the phone is supposed to be entering mass production and it will beign to ship this summer.

Jannard says that RED has apparently been able to get “unprecedented” carrier support for the Hydrogen, but he refrained from saying anything more about which carriers he’s talking about other than that it’s “Safe to say it is as good as it gets.” This could mean that the Hydrogen One is getting support from major US carries. Jannard also said that they will be releasing the pre-ordered Hydrogen One phones before the carriers because they’ll be unlocked and they won’t have to go through the carrier approval processes.

The post did reveal a little more about the actual specs for the Hydrogen phone, but it was pretty vague on most things. We know that it will run with a Snapdragon 835 processor (Jannard wrote “835x” so that may be a typo or it could be something that hasn’t been revealed yet), and have a dual SIM slot, a headphone jack and a huge 4,500mAh battery. He additionally revealed that the phone weighs about “2 ounces more than most 5.7” cell phones” and is slightly bigger, a few millimeters, than other 5.7” phones.

Really, the big key features for the Hydrogen One is its camera and screen. The screen, as mentioned before, is supposed to be capable of displaying holographic 4-view content that has been described as 3D images that will change based on your perspective. It’s also said to be able to record video in 2D, traditional 3D and in RED’s unique “4V” format.

Jannard later reported that the Hydrogen One will have a number of modular accessories that you can add to it, like a battery pack and a “cinema grade camera module.” The camera module is also reported to have the capabilities to record RAW video in RED’s R3D format, but it will only support recording 2D footage.

Jannard does say that additional modules to improve the 3D and 4V filming are planned and that RED is working on a “Hydrogen Network” that will collect 4V video from “major studios and other content providers.”

Jannard and RED seem to be highly confident that the Hydrogen One is nothing less than revolutionary. However, for us, we can’t tell yet. It sure sounds awesome, and with RED’s reputation as a revolutionary camera company, it’s hard not to be excited about the Hydrogen One, even if some of it seems far-fetched at times. Also, it’s only been seen by a select few of people (like Marques Brownlee who got an early look at the phone) so there’s nothing to really judge the phone with other than a few reactions and RED’s word. But we know RED is capable of developing some pretty impressive tech, so here’s hoping the Hydrogen One is as revolutionary as RED’s making it out to be.