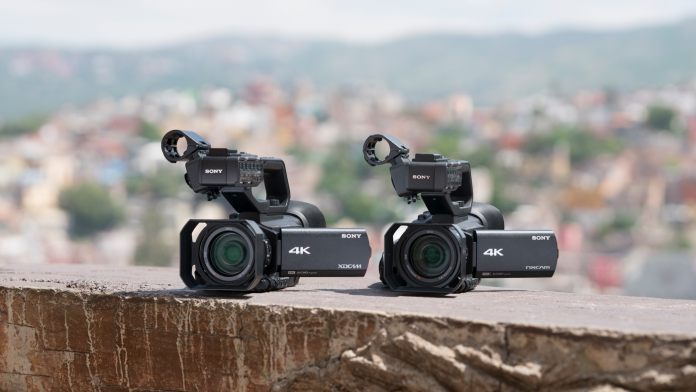 Getting everything in focus is critical. You need a camera that can find focus both quickly and accurately. There are lots of ways to focus your camera, but one of the best ways is to use a camera that offers hybrid autofocusing — like Sony’s new trio of phase detection hybrid AF cameras. The Sony PXW-Z90V, HXR-NX80 and FDR-AX700 are huge milestones for Sony because they are the first Sony cameras to feature phase detection hybrid AF for video shooting.

When you use hybrid AF, it combines both phase and contrast detection, first using phase detection to get the initial focusing as quick as it can, then switching to contrast detection to really fine tune and sharpen the image. You get the best of both worlds: fast focus to capture the action without sacrificing accuracy. Hybrid AF is super helpful to videographers using a gimbal or shooting run and gun, and it’s especially helpful if you’re shooting in 4K.

Now you can see why the PXW-Z90V, HXR-NX80 and FDR-AX700 are revolutionary for Sony, but just having hybrid AF isn’t enough; Sony wants to utilize the camera’s phase detection hybrid AF to its max. When focusing, the cameras uses 273 phase detection AF points that cover 84 percent of the entire shooting area with high-density placement of autofocus points and new AF operating algorithms. And when you’re in movie recording mode, Sony says you’ll get phase detection AF frames that help indicate the focused area and will allow you to easily monitor the subject or subjects that are in focus.

It’s also important to have a good tracking system with hybrid AF because your subjects aren’t always going to be standing still. The PXW-Z90V, HXR-NX80 and FDR-AX700 guarantee users complete control of the targeted focus area and offerers adjustable AF subject tracking, or you can switch and use face-tracking instead. You can also lock onto your subject’s faces if you so choose.

And looking to satisfy the need for speedy AF, Sony’s cameras promise to make it quick and easy to switch focus between subjects. At the same time, you are able to configure the AF Drive Speed, Tracking Depth Range and Subject Switching Sensitivity to adequately focus on different subjects and reinforce the style of your content.

Sony is also proud that the PXW-Z90V, HXR-NX80 and FDR-AX700 are completely capable of combining the essential attributes of hybrid AF — speed and accuracy — while still shooting video on a 1.0-type stacked Exmor RS CMOS image sensor.

Hybrid AF really is the most efficient way to focus. Sure, using phase detection and contrast detection have their advantages, but they pale in comparison to hybrid AF because hybrid AF has all their advantages but none of their flaws. Sony’s new PXW-Z90V, HXR-NX80 and FDR-AX700 strive to harness their hybrid AF system to its full potential. You can learn more about the PXW-Z90V, HXR-NX80 and FDR-AX700 by visiting their tech specs pages. You can also see the PXW-Z90V and HXR-NX80 in action in the video below.