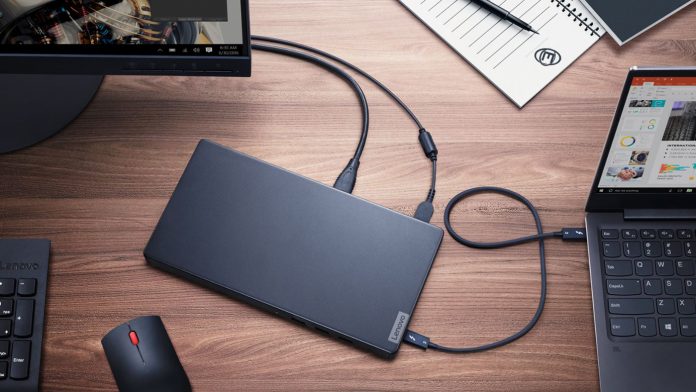 There were a couple of big releases at CES 2018 this year, the biggest one being Panasonic’s GH5S reveal, but there were a few potentially promising products that didn’t get a whole lot of coverage. One of those products happen to be Lenovo’s Thunderbolt 3 Graphics Dock, which aims to deliver additional graphics processing power through Thunderbolt 3.

Though it’s small in size, which often decreases the power of such devices, Lenovo boasts that this device is powerful enough to run Windows Mixed Reality at 90 Hz rates.

It’s made with an NVIDIA GeForce GTX 1050, and there doesn’t seem to be any way to upgrade that graphics card other than buying another dock if Lenovo puts out an updated version out. Regardless, Lenovo promises that the GTX 1050 will be able to perform in graphics-intesive applications like VR without issue.

Being designed to connect to thin and light notebooks, dimensions for Lenovo Thunderbolt 3 Graphics Dock measure out at 130 mm x 248 mm x 22.6 mm and weighs 686 g, ultimately making it smaller than a laptop. It’s price is also a low $399. It looks like Lenovo is trying to make this graphics dock appealing to those who want portability, but also those who want higher power for gaming and other applications that have demanding graphic needs. It’s positioned to be in the middle of the road for portability and power.

As for ports, the Lenovo Thunderbolt Graphics Dock has one HDMI 2.0 out port, two DisplayPort 1.2 ports, one USB 2.0, one USB 3.0, one USB 3,0 with a power output of 2.4 A, a 3.5 mm combo jack, and a Gigabit Ethernet port. Additionally, it can simultaneously power a connected laptop / other USB devices.

The device will be released sometime in 2018; there is no specific date yet. It will be selling for $399.