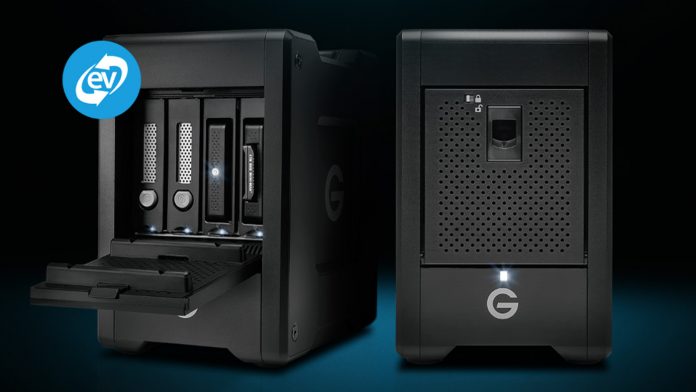 When you’re looking through the market for a capable storage solution, one of the leading players that market is G-Technology, a company that’s constantly trying to up the storage capacities in their products. One of their most popular storage solution line is the G-SPEED Shuttle family, which includes the G-SPEED Shuttle XL. The XL is a 8-bay portable hard disk that offers storage all the way up to 96TB; we reviewed the XL in 2016 and found it to be a pretty darn impressive. But for some, 8-bay is more than enough storage, so G-Tech this week have unveiled they’re new 4-bay that’s trying to accommodate to production that still want quality data storage, but want to keep prices lower.

According to G-Tech through a press release, the new 4-bay version of the Shuttle, which is now compatible with Thunderbolt 3, will still be a very capable of a machine for professionals despite being smaller, claiming that video (and photo) professional will find it to be highly portable and will be able to transfer over one hour of 4K footage at 30fps in just a few minutes at up to 1,000 MB/s.

There’s new two arrangement options for the 4-bay Shuttle that you could decide to go with:

G-SPEED Shuttle with Thunderbolt 3 features dual Thunderbolt 3 ports, and offers up to 48TB and hardware RAID 0, 1, 5, and 10 while still in a 4-bay design. It’s also listed to deliver transfer rates up to 1000MB/s, removable 7200RPM enterprise class drives and as well the power needed to handle “demanding multi-stream workflows of 4K and beyond, both on location and in the studio,” according to G-Tech.

This model is similar to the G-SPEED Shuttle with Thunderbolt 3 in terms of features, but it’s got integrated ev Series bay adapters that should improve the Shuttle’s overall productivity by enabling cross-functionality will all ev Series drives and readers. The device is as well listed to provide transfer rates up to 500Mb/s with up to 24TB.

Now while the prices may look high initially, they actually seem pretty reasonable. With our past experience with G-SPEED, their products have often been worth what is being asked for them. And while a video hobbyist may not have the need for 48TBs of storage, professionals and crews could find new less expensive and more portable 4-bay option for the Shuttle to be a viable option to go with.

To learn more about the two new arrangements for the G-SPEED Shuttle, go to g-technology.com/products.