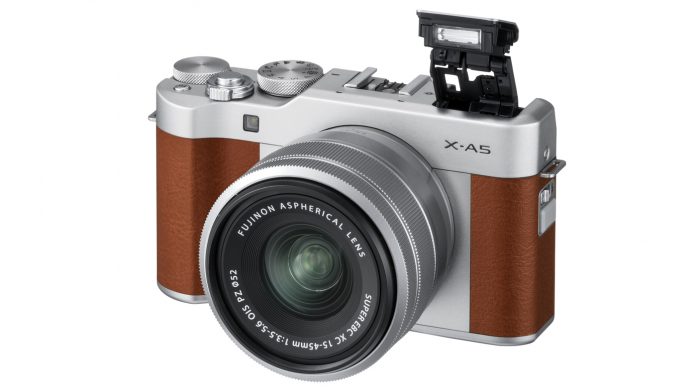 Fujifilm has not only just announced a completely new mirrorless digital camera called the X-45; they’ve also unveiled the first Z-series power zoom lens: the Fujinon XC15-45mm f/3.5-5.6 OIS PZ. The X-45, paired with XC15-45mm, is the lightest camera-zoom lens combo in the X-series lineup, according to Fujifilm, and the X-45 is set to host a number of new and improved features when compared to its predecessor, the X-A3, including faster autofocus and 4K video.

Designed with a retro-styled look, the X-45 has a 24.2-megapixel APS-C (non-X-Trans) sensor along with an on-chip detection that makes its phase detection autofocus twice as fast as the X-A3. Its ISO sensitivity range is now also ISO 12800 and can be extended up to ISO 51200.

And Fujifilm also promises better skin tone reproduction and subject recognition, but its burst shooting speeds are still the same as the X-A3 at 6 fps.

While it’s true that the X-45 does now also offer 4K video capture, it’s limited to 15 fps and it can only last for five minutes max.

The XC15-45mm is Fujifilm’s first motorized power zoom lens, and it seems like it’s going to be one of their most lightweight zooms as well; it weighs only 136g.

And when compared to Fujifilm’s ultrawide primes, like the 14mm f/2.8, Fujifilm customers may find that the XC15-45mm, with its 15mm wide end, to be an inexpensive alternative.

The X-A5 will start shipping on February 8th for $599 along with the XC15-45mm lens. The lens will also be available by itself in February for $299.