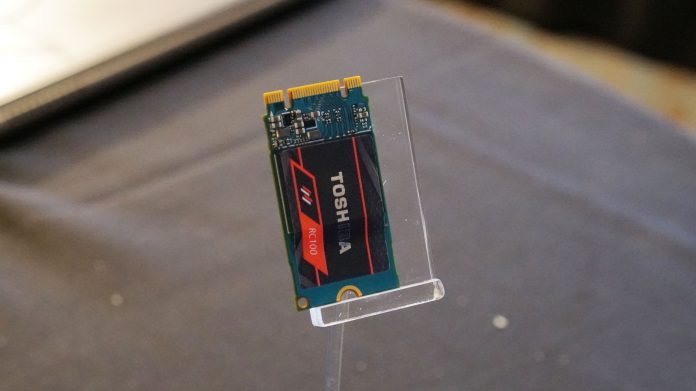 It’s no secret that SDDs can get pretty expense, especially when you want a lot of storage. Luckily, it seems that Toshiba’s adding a “competitively” affordable SSD to the new line of NVMe M.2 SSDs, calling it the RC100. The RC100 look like it’s been designed to deliver cost effective PCIe-compatible storage for entry-level gaming PCs and upgrades, offering 480GBs of storage for what is predicted to be a low cost.

Announced at the beginning of CES 2018, the RC100 drive uses BICS Flash memory (Toshiba’s brand name for 3D NAND — a technology used to pack more memory cells into a smaller space) to ultimately use 64-layer TLC NAND with an in-house control that doesn’t require onboard DRAM. All of the leads to a drive with sequential read/write speeds of up to 1,500/1,000MB/s, PCle 3.0 Gen3x2 and supports NVMe 1.2.1 interface specifications.

The new SSD uses the NVME’s protocol HMB (Host Memory Buffer) feature, setting aside some system RAM for caching. According to Toshiba, the drive only needs a 32MB buffer to run at partially full performance levels.

Price for the new SSD are expected to be “competitive” with the least expensive NVMe drives. Since Toshiba wants to make NVMe much more mainstream with the RC100, and selling it with a reasonable price is essential in that aim.

The market has never been more ready for NVMe to go mainstream, but it needs the right product,” said Alex Mei, vice president marketing, consumer SSDs and storage outbound marketing at TMA. “With the ultimate balance of value, size, power, and performance, the RC100 SSD Series makes leveraging all the benefits of NVMe a reality for more users than ever before.”