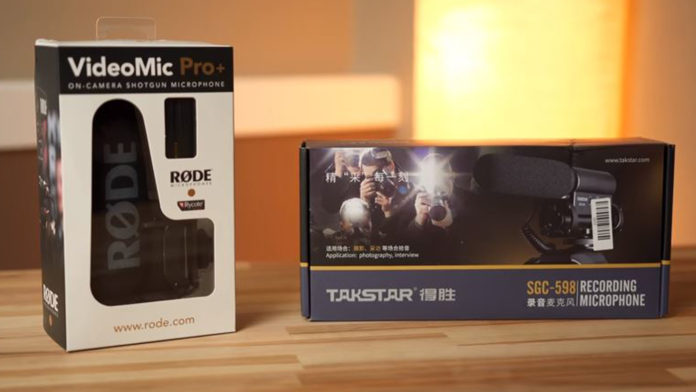 Rde makes some of the most widely used video microphones on the market, but has Takstar got them beat with their highly affordable $25 Takstar SGC-598 microphone? Find out when YouTuber Max Yuryev pits Takstar’s mic against Rde’s VideoMic Pro+.

Both of the microphones are shotgun microphones and Yuryev says that both can boost a signal that is sent to the camera that you are using, which will allow you to turn down your internal preamps and get cleaner sound. He compares the two saying “[The Takstar] will do zero or plus ten decibels. [The Rde] will do negative ten, which is nice for louder environments like concerts zero or plus twenty, so it does send a stronger signal,” later saying that the Rde is good for certain cameras like Canon, which have noisy preamps.

He goes over a few features that he likes better on the Rde, like dual track recording and the auto on and auto off feature, but around the end of the video, he admits that he actually puts himself in the middle between picking the Rde or the Takstar mic. He says that the new Rde has a lot of bass and a rich sound that a lot of people like, but he’s heard that the Takstar picks up highs better than the Rde and you can add bass to the Takstar to make it comparable to the Rde.

He ultimately rules in favor of the Takstar in terms of overall value: “I would give the win to the Takstar because you’re getting a $25 microphone with a really nice sound once you add a little bit of bass back in.”

For the noise floor, Yuryev doesn’t see much of a difference between the two, even though he does see that if you’re using a Canon camera, the Rde would be very helpful with its noisy preamps

The biggest thing that Yuryev felt the Takstar beat the Rde will was its mounting design. With the Rde, he found it hard to see through his camera's viewfinder with the mic mounted. The Takstar however has different mounting points, which allows you to mount it in a position that won’t prevent you from getting to the viewfinder.

In summary, Yuryev recommends the Takstar if you want to get a good deal on a microphone that offers good quality. With it, you'll have to buy a few more features like an extended cable and a boom arm, which would raise the price to around a $70 or $80, but you are still saving money.