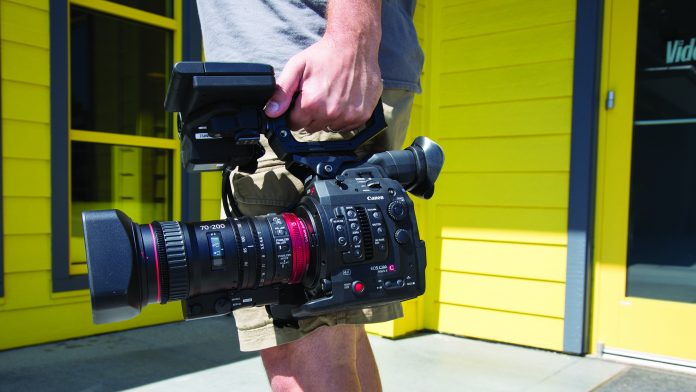 At NAB 2017 we got the first look at another affordable cine zoom from Canon. In Las Vegas after dark on Fremont Street, we went out shooting with DP Fletcher Wolfe. Alongside Fletcher, we were the first outside of Canon to use the lens. The COMPACT-SERVO 70-200 T4.4 is the same form factor as the 18-80mm and is also for a Super 35 image sensor. Since the 70-200mm focal length is widely used, this, along with the 18-80mm, completes most users field of view needs.
Costing a bit more than the 18-80 at 5,800 dollars, the 70-200mm is both parfocal and has a constant T4.4 aperture across the full throw of the lens. It is an EF mount lens, has clickless iris control and is color matched with the other COMPACT-SERVO lens. Lastly, it’s a cine zoom lens with image stabilization.
We used the new lens both in Vegas during NAB 2017 and for a few weeks back at Videomaker World Headquarters. All of the creature comforts are there, including focus, zoom and aperture control on the lens. Plus, it has servo controlled zoom, so you can get perfectly smooth zooms. Again, this lens is almost identical to the 18-80. We had the same experience with the 70-200mm as we had with the 18-80mm; it’s rock solid. We got some time operating the lens both with and without the optional Servo-Grip controller. Mounted to a C300 Mark II, it was nice to have pressure sensitive control of the zoom. However, this is not an option every user might need. Assess your needs to see if you should reserve some budget for this option.
We wouldn’t expect to be able to capture much of a bad image while using the C300 Mark II. With that said, both lenses look great. When equipped with both lenses, there are few situations where you won’t have the focal length you need. Shoot handheld for an event with the 18-80, then mount up on a tripod with the 70-200mm and you’re ready to shoot anything from an interview to wildlife. The space compression at 200mm is ideal for hiding a messy background or flatting larger facial features.
While 5,800 dollars seems like a lot for a lens, it’s affordable when it comes to cine zooms. Add in that it has a servo controlled zoom and both lenses are uniquely placed in the market. Our only criticism for the lens is that it has a T4.4 max aperture. Canon cameras aren’t known for having stellar low light capabilities, so every stop of light matters. If it was a T2.1 there wouldn't be anything that could keep up.
The lens is a great value and the perfect match for the 18-80mm. The image quality is fantastic and it offers all the cine features you need. Plus, options like image stabilization and servo-controlled zoom set it apart from the competition.