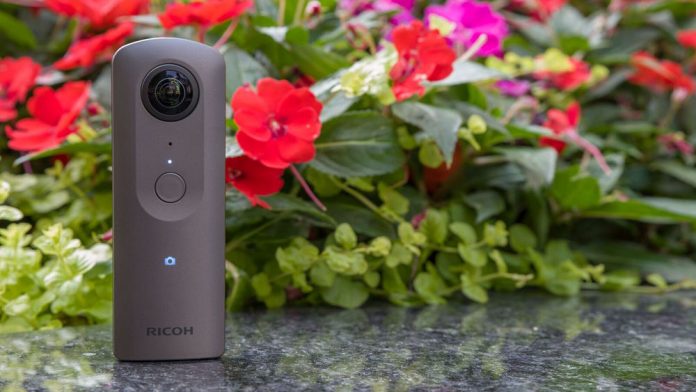 It’s been about four years since the first Ricoh Theta. And it's been just a year since the Theta S was released. We liked it enough to give it our Best 360 camera of CES 2016. Now Ricoh is expanding their line of 360 cameras with the Theta V.

“Based in that award-winning, slim-line design of previous Theta models, the Theta V is lightweight, easy to use and compact enough to carry everywhere. A number of new enhancements allow the camera to produce more realistic “as-if-you-were-there” 360-degree content,” says Ricoh in their press release.

The Theta V will stream UHD 4k 360 video. Ricoh says the quality of still images from the Theta V has been improved as well as the data transfer speeds.

Ricoh wants to make it very clear that the Theta V is designed with a number of new features that will make the Theta V a “uniquely “immersive experience for consumers and business, alike.” Features like spatial audio recording, high-speed image transfer and “the world’s first wireless remote playback in a 360-degree camera.”

The Theta V has four mics to record and capture audio from four different directions. When watching the 360 video back in your VR headset, the audio moves with the headset movement. “By adopting four directional microphones with excellent frequency, high audio quality with seamless transition recording is possible.” says Ricoh Imaging. “With high quality 360° 3D spatial audio, fully immersive VR content can be captured.”

As for accessories, the Theta V is set to have two: a 3D microphone (with a wind screen to reduce wind sound), and a underwater housing case. The 3D 360 microphone is an attachable microphone to the Theta V to enhance the recording of the Theta V’s already built-in 4 microphones. “This dedicated 3D microphone for the THERA V was developed under a technical cooperation with Audio-Technica, who is well known for their high technology and reliability. By adopting this design high quality 360° 3D spatial audio with a wide frequency range is achieved.” The underwater housing allows the Theta V (or the Theta S or SC) to be submerged 30 meters underwater.

The Theta V’s retail price is set at $429. Check out theta360.com for more updates of the Theta V.