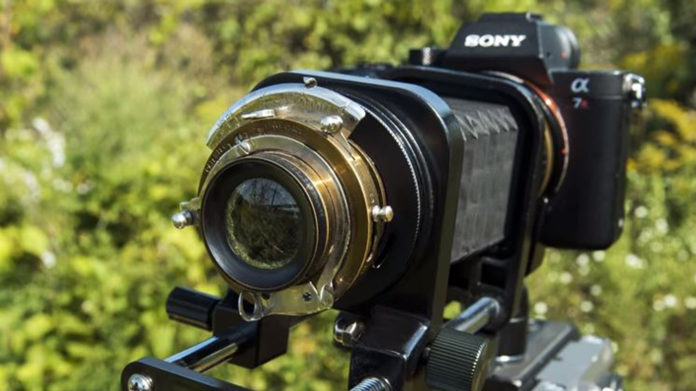 A lot of videographers want to expand beyond the lenses that are offered for their Sony cameras. They could have other lenses for a different camera platform that they would prefer to use, or they may even want to shoot with a vintage lens. The problem though is that when you adapt a lens, you lose the ability to have autofocus. However, Fotodiox says that their PRONTO Lens Adapter can give autofocus to practically any lens as long as it is attached to a Phase Detection AF Sony camera — even vintage manual lenses.

Fotodiox shows off how the lens works in a recent YouTube video posted on Fotodiox’s YouTube channel with camera expert, Bohu.

In the video, Bohu unboxes the PRONTO lens adapter and says that it is ready to mount right out of the box and that there is no need to charge it because it gets all of its power from the camera itself.

The adapter works because it is able to move the lens forwards and backwards in cordination with the Sony’s autofocus system, and will move the lens into the right position to achieve proper focus automatically.

Bohu says that if you use the PRONTO lens adapter with one of Fotodiox’s lens mounts, you will have the ability to give autofocus to a lot of vintage lenses, even ones that are 120 years old. Bohu demonstrates how the PRONTO len adapter can give a vintage lens from 1897 autofocus.

He attaches the PRONTO lens adapter to a Bausch & Lomb 1897 lens, which was made for box cameras, and instead attaches it to his Sony camera. He notes that the lens has to be less than two pounds, otherwise the adapter’s motors will not be able to smoothly move the lens.

When shooting with the 1897 year old lens, Bohu does have to manually adjust its infinity focus, but after that, the PRONTO is ready to work.

The PRONTO seems like it could give videographers the luxury of keeping some older lenses that they would prefer to use. We’re not sure how many of you actually have 120-year-old lens, but it's great to know that you could have the option to use one with the PRONTO if you so choose.