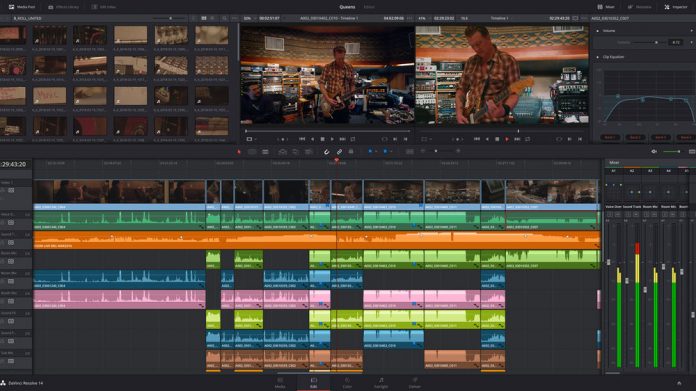 Back in April at NAB, Blackmagic revealed a Beta version for their DaVinci Resolve 14 and it proved to be quite powerful post-production software. We ended up awarding it with out Best Software of NAB 2017 award. Now, the full version of the software is beginning to ship.

Blackmagic Design has updated this latest version of DaVinci Resolve to improve video editing performance by ten times and provide faster playback and the ability to work with thousands of video clips on its timeline. It also sported more control over skin tone adjustments and the ability to use facial recognition and tracking to make the process of editing a subject’s face easier and quicker.

The Beta version of the DaVinci Resolve 14 has done very well since it’s reveal at NAB, with Grant Petty, the CEO at Blackmagic Design saying that “the public beta of DaVinci Resolve 14 has been downloaded more than any other version of the software in its history.” But he goes on to praise the newer version, explaining what the final version will offer its users: “This new version is a major leap forward because it now gives every customer, from individual users to large studios, a way to seamlessly move between editing, grading, and audio. That means they can spend more time being creative and less time translating projects and switching between multiple applications!”

The final version of the DaVinci Resolve 14 doesn’t look extremely different than its Beta version, so those editors already using the Beta version likely won't notice much difference. However, with that said, the full version is probably a bit more stable, so it's worth it to install the official release.

As usual, Blackmagic Design is offering the standard version of Davinvi Resolve 14 for free, while DaVinci Resolve 14 Studio is available for 300 dollars. But remember, if you are planning on buying Resolve 14 Studio, there’s no reason why you can’t try out the free version first to see if you like it or not. It’s free after all.

If you want more information on the DaVinci Resolve 14, go to blackmagicdesign.com.