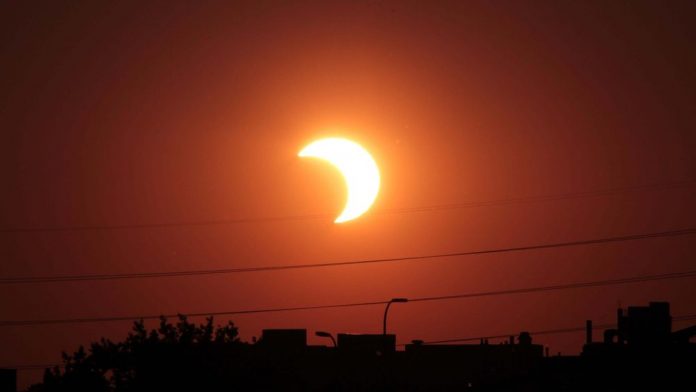 The Great American Eclipse is coming to North America Monday August 21st, and when something as rare as a total solar eclipse comes to your neighborhood, it’s only natural to want to preserve that event on video. Here are our top three tips for getting the shot:

1. Get a Solar Filter

Unless you’re lucky enough to be in the path of totality and only want to record the half-minute or so that the moon will completely cover the sun, you will absolutely need a solar filter. As has been expressed countless times in the lead up to this event, you simply cannot look directly at the sun, even during a partial eclipse, without damaging your eyes. Looking at the sun through an unfiltered camera lens is just as bad, if not worse, and there is the added risk that you will damage your camera’s sensor.
It may be tempting to just stack several ND filters together, and while this may work to get you the shot, it may not be enough to protect your eyes. IR and UV rays are the real danger here, but it’s difficult to tell if you’ve eliminated these harmful rays since they fall outside the visible spectrum. Therefore, best practice is to use a filter made for this purpose — or at least compose your shots using the electronic live view monitor — not your optical viewfinder that looks directly through the lens. Solar lens filters or filter sheets can be had for as little as 16 dollars on Amazon, though some options run as much as 200 dollars depending on the filtering materials used.
That said, you’ll want to remove the filter during totality after all direct sunlight has disappeared. NASA has more information about eye safety and when it’s OK to look at the sun during totality.

Don’t bother shooting the eclipse if you don’t have a plan. I’m serious. Don’t waste this opportunity to see something amazing unless you research what to expect going in and have a goal for how you’d like to use the footage once it’s captured. Will you capture the entire event, then speed it up in post for a hyperlapse effect? Will you shoot smaller clips at various focal lengths for an eclipse montage set to music? Or will you try to tell the story of the eclipse as a human experience, with shots of your viewing companions interspersed among your eclipse footage?
As you make you preparations, consider what gear you’ll need to capture the shots you want. If you want to capture coronal detail during totality, you’ll want a longer lens — at least 200mm, but preferably up to 1500mm or longer if you have it. A telescope would be great for serious astrocinematograpers, but a long zoom lens will likely be ideal if you’d like to capture a variety of shots of the eclipse and the surrounding landscape. You may also want to set up a programmable motion control system to track the movement of the sun if you’re planning a really tight shot.
Having more than one camera up and running during the event will give you even more flexibility. You’ll also want to decide now if and how you’ll capture audio — the ambient sound during the event can add a sense of presence to your shots that still photos will lack.
Start planning and experimenting with your gear now so you’ll be confidently prepared come August 21st.

Lighting conditions are going to change (duh), so you’ll want to take control of your camera’s exposure. Take some time before the eclipse to find the exposure that work with your solar filter. This will be your exposure setting for most of the eclipse, until the thinner crescent phases right before totality when the light will dim significantly and you’ll need to adjust your exposure accordingly.
Shooting the totality is harder to practice, but a large Moon will provide similar brightness so you can at least anticipate an appropriate exposure. Get your camera ready before totality hits and be ready to remove your solar filter as soon as the last sun rays of the so-called Diamond Ring and subsequent Bailey’s Beads are gone. You want to capture as much of the event as possible, so be prepared before totality hits. This solar eclipse exposure calculation tool may point you to a good starting point.
Likewise, don’t true your eclipse footage to your camera’s autofocus, especially if you’re in the path of totality and plan to capture that coveted coronal detail only visible under these special circumstances.

Don’t forget to look up and enjoy the view for yourself once your camera is rolling! Don’t spend the entire event looking through your lens and miss out on an incredible experience!
To learn more about the Great American Eclipse and to find out how much will be visible in your area, visit www.greatamericaneclipse.com.