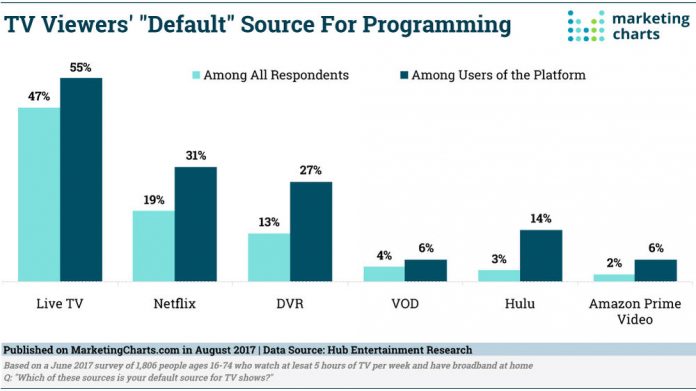 Online video streaming services are the craze these days and Netflixs is one of the video streaming giants. Netflix is so big that it is making some significant ground on live TV for being viewers go-to place for watching their shows.

Market Charts just released a new stunning report that shows that live TV is still the first choice for viewers to watch their shows, but don’t rest just yet live TV lovers. The report also shows that 19 percent — roughly one in five viewers — say that their primary source for TV programming is Netflix. That number was at 15 percent last year.

There are many possible reasons that the number of people going to Netflix is growing, but one of biggest reasons is probably Netflix’s “can’t-miss” original content that viewers can only watch if they are subscribed to the streaming service. It’s no coincidence that Netflix is investing billions into their original content.

Outside of Netflix, the report shows that one in four viewers will go to a subscription  video-on-demand service as their default source for television.

Techcrunch also found it remarkable how different the figures were for the youngest TV viewers: “What’s also interesting about this study is how remarkably different these figures are when you look at the youngest TV viewers. Unfortunately, the report didn’t measure the same exact age groups year-over-year, so a direct comparison isn’t possible. But a general trend can be spotted. Last year, the firm found that 27 percent of Netflix users ages 18 to 34 would turn to the streaming service first. This year, it said that 50 percent of those 16 to 24 did the same.” And in both cases, the figures are higher than the older age groups.

The main point that you can draw from this report is that younger people are less likely to turn to live TV when they can stream instead. Live TV may still be ahead of Netflix now, but those figures could prove to be very different in the near future. It isn’t crazy to think that Netflix, or any other streaming service, could surpass live TV for viewers first choice for watching television.