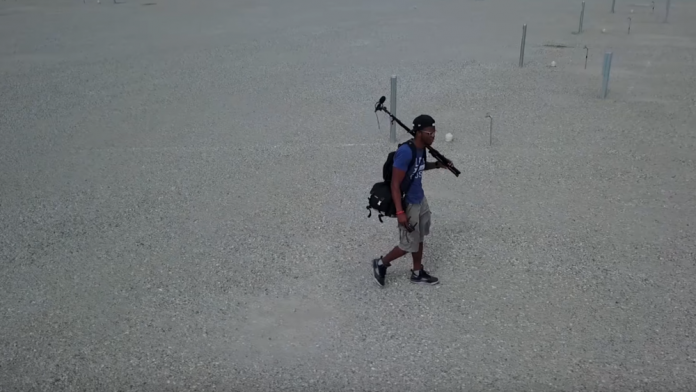 Not everyone is so lucky to have a full film crew and many beginning filmmakers have just themselves to do everything from the scriptwriting, filming, acting and editing. Seems like a lot of work right? It should — because it is.
Films featuring a full crew and films featuring just yourself require completely different setups and approaches. They are like different languages. Luckily, D4Darious wants to help you translate the one person crew language and start making the best videos you possibly can.
https://www.youtube.com/watch?v=hRXd0MMsixI
Here are the main points that D4Darious touches on in his video:

“If you know you’re going to be shooting without a crew, you need to keep the stories simple. No car chases. No epic shootouts,” D4Darious says promptly in the video. This is one of the biggest mistakes that beginners make when they are shooting by themselves or with a small crew. The simple fact is that there are things you just can’t do with a small film crew without having it look unprofessional. It is very easy sometimes to get too ambitious when you are planning — I know this first hand — but try to keep your ideas practical. Know what your resources are and write the story around it. “If you get too ambitious too soon, you’ll be pulling your hair out when it comes to shooting,” D4Darious says, suggesting that you should start out making microfilms or short films when shooting by yourself. That way you can learn everything you need so you can branch out into bigger and longer productions.

Experiment With Your Camera Shots

Since you won’t have a cameraman operating the camera while you are acting, you’re going to have to get creative when it comes to keeping your shots interesting rather than static and boring. D4Darious points out that there a certain shots that you just won’t be able to get when shooting alone, shots like dolly shots and jib shots, because you won’t have the crew you need to set them up. He suggests that you should focus on simpler shots like pan shots, tilt shots, slider shots and well-composed static shots. “Framing is your best friend,” he continues, “Focus on getting strong compositions. Use the rule of thirds, but don’t be afraid to experiment.” Never be afraid to take a chance on a weird or abstract angle. Taking chances on your framing and angles will make even your static shots interesting.

Use the Right Equipment

If you’re going to shoot something by yourself, you’re going to need the right equipment.“You’re going to need a camera with an articulating LCD screen, preferably one that flips out where you can see yourself in front of [the] camera,” says D4Darious. A camera like this will make your life a million times more easier because it will allow you to check your framing, even when shooting selfies. Or you could even download an app that can act at the camera’s LCD screen so you won’t have squint if you’re far off from your camera. You’re also going to need to use something like a coat rack or a stand to be able to get your focus right before you start filming. And never forget your audio. It can be easy to forget when you’re doing everything for your film. “Camera microphones are notoriously bad and they’re useless if the camera is further than four feet away from the action. You’re going to want to use an external mic,” D4Darious says. Doing things like mounting a mic on top of the camera, mounting a shot mic on a mic stand and connecting it into your camera, or mounting a shotgun microphone and connecting it to a sound recorder will keep your audio sounding professional. And if you really want to get practical, you can always use your cellphone audio recording capabilities if you’re able to keep it out of the shot.
Filming alone can be a challenge, but it doesn’t have to be an impossible challenge. If you just continue to practice and never stop filming, you’ll soon be making a compelling films regardless of your crew size.