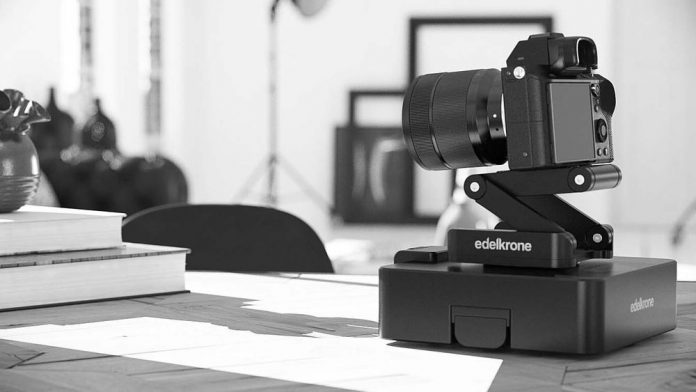 Developers at edelkrone are always pushing the envelope in the tech industry. Their products are like no others, and their latest release doesn’t appear to be breaking that trend in the slightest with edelkrone unveiling their 2-Axis motion control system, the SurfaceONE.

Operated by the convenience of your iOS or Android device, edelkrone hopes that the SurfaceONE will make capturing stable moving time-lapse video as easy as it can get. It uses a built-in laser pointer that’s suppose to allow for precise targeting for when the SurfaceONE is circling a target.

“Just target your subjects from two different angles and done!” edelkrone says on their website for the SurfaceONE. “You now have a perfect 360° track around your subject.”

The SurfaceONE could prove to be very helpful to smaller films crews or single person crews. If the SurfaceONE is able to deliver on what it promises, those small film crews who just have enough people to form a cast and not a crew, won’t need to have someone operating the camera to get interesting shots, adding much more creativity and professionalism to the way their videos are shot.

The speed that the SurfaceONE can travel is adjustable on its owner's phone. The max speed that it can travel is 20 centimeters per second, while its slowest speed is around a few millimeters per second. Edelkrone says that the distance between the SurfaceONE and the object that it circles doesn’t matter. It will be able to capture it as long as there is a surface for it to glide on.

“Target any object at any distance. Easily shoot huge arcs as long as you have a smooth & flat surface,” edelkrone says.

At this point, we can only see one possible setback to the SurfaceONE: You need to have a smooth surface to film on if you want to use it. If you’re filming a scene where you want to capture a complete 360-degree rotation around your main character sitting in a chair, you would need to have a smooth surface that surrounds your actor for the SurfaceONE to travel on. You could always try and to film on the floor, but that may not be the angle you want to shoot from. This is a minor setback though. Looking past instances where you want to get 360 shots of things too large to put onto a table, it looks pretty darn promising.