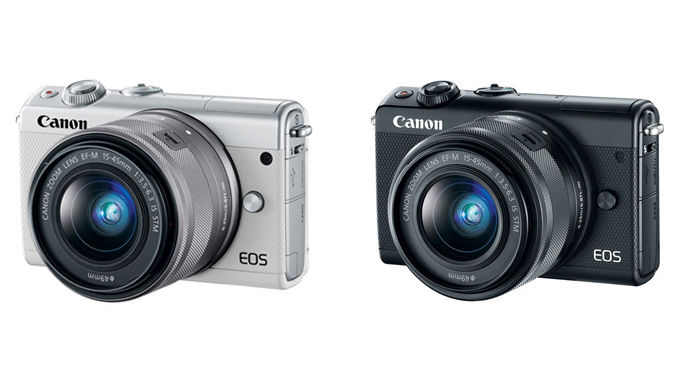 Canon has introduced to the world the successor to the highly popular EOS M10 — the new EOS M100, which they say is an easy-to-use, but still powerful, interchangeable lens camera that is perfect for smartphone photographers looking to up their game. And along with the camera, Canon is also releasing multiple interchangeable lenses and a flash.

But Canon believes that they can make up for that with power, incorporating a M10’s 24.2-megapixel APS-C CMOS sensor and the Canon DIGIC 7 processor to the M100, citing that the M100 is able to capture images and videos beyond want any phone would be able to.

“We are living in a moment where more images are being taken and shared than any other time in history. In an increasingly visual world, high-quality images are the ones that truly stand out from the crowd,” said Yuichi Ishizuka, president and COO, Canon U.S.A. “The new Canon EOS M100 can be the ideal camera for those eager to step up their images and share their creative vision without sacrificing image quality or on-the-go performance.”

From what we’ve heard from Canon so far, it does seem like the M100 will be a good camera for on-the-go, causal shooting. It’s suppose to be lighter and slimmer than the M10, so we could see this being a good selling point for smartphone videographers and photographers, since one of the major perks of using a smartphone is its portability and ease of use. To further its on-the-go appeal, Cannon says that the M10 is Wi-Fi, Near Field Communication and Bluetooth connected, so you can upload and share easily. The camera also works with compatible smartphones’ GPS to make geo-tagged logs of where you took your footage.

The Canon EF 85mm f.14L IS USM looks like it’s going to be a super fast portait lens that includes an image stabilization feature that uses four stops of shake correction.

As for the macro tilt-shift lenses, I’ll be honest, you’ll either love them or hate them. If you don’t know what a tilt-shift lens does, it basical makes the things you shoot look miniature by allowing you to make interesting adjustments to the focal plane. They give your footage a very distinct look and not everyone likes the effect. They were popular several years ago, but aren’t so popular now. It’s probable that the M100 users that do want to shoot with Canon’s new tilt-shift lenses will just rent them. However, if you’re interested in learning how to use tilt-shift lens and other specialty lenses, check out our guide on specialty lenses.

Also, here’s some example footage shot by a tilt-shift lens if you’re interested:

Cannon is also releasing a new flash, the Macro Twin-Lite MT-26EX-RT Flash, that has twin detachable macro lites that can be rotated up to 60 degrees.

For more info on all of these products, visit usa.canon.com.