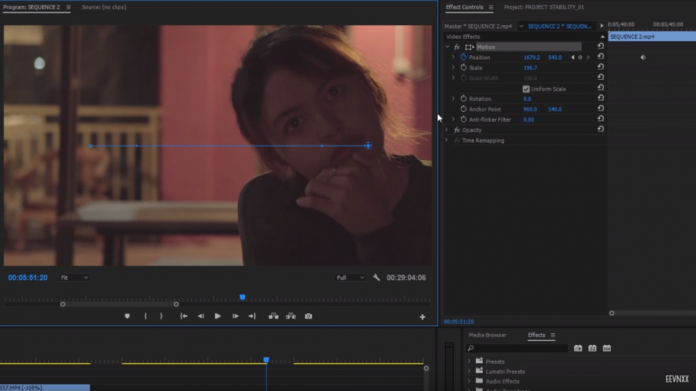 When it comes to shooting footage, YouTube vlogger eevnxx says that “it doesn’t even matter what you’re shooting. As long as it’s stable it’s almost always bound to look cinematic.”
Keeping your footage stable is one of the best ways to come off as a professional, but it sure can be expensive. If you aren’t willing or can’t afford to shell out the cash to get the high-end stabilizing equipment, check out what tips eevnxx has to give you:
https://youtu.be/Wq8S0p2xlzg

Use a Stabilizing Software

If you’d rather use your computer and not have to think that much about equipment while shooting, you should try out using a stabilizing software. “You can use a software solution, something like Adobe’s warp stabilizer in order to turn your shaky mess into smooth movements,” eevnxx suggests. Software like Adobe’s warp stabilizer is easy to use and you can adjust settings throughout the process. There are some setbacks to using a stabilizing software though. It only works well on footage that has minor movement. If there is a lot of movement, it will start to look computerized or liquified. But it is a good alternative for fixing minor jolts.

If you have the ability to shoot in 4K or higher, you can use the extra resolution while you are editing to add movement after the fact. Eevnxx says to do this you should “lock your camera down on a tripod and shoot as wide as you would like” and when editing you should use a “1080p timeline so that you can use that 4K resolution to your advantage so you can scale in and out to create a zoom in in kind of look or you can just pan and move the footage around to make it look like the camera was moving.” This technique doesn’t give your movements depth as would moving the camera while shooting, but if it’s the type of effect you want, then it’s a great alternative.

In the end, the best way to keep your footage stable is to get a stabilizer, either a sled setup like a Glidecam or a motorized gimbal like the DJI Ronin. But it’s something that you can work up to if you can’t afford a stabilizer just yet.
Stabilizing your footage can be difficult and sometimes can be overlooked when you're trying to capture the moment. It’s one of the most important aspects to your production, though, because it communicates professionalism to your audience. They can see that you took the time and effort and had the resources to make your footage look stable. Use some of the tips or a combination of them and your moving camera work will start looking a lot smoother and more professional.