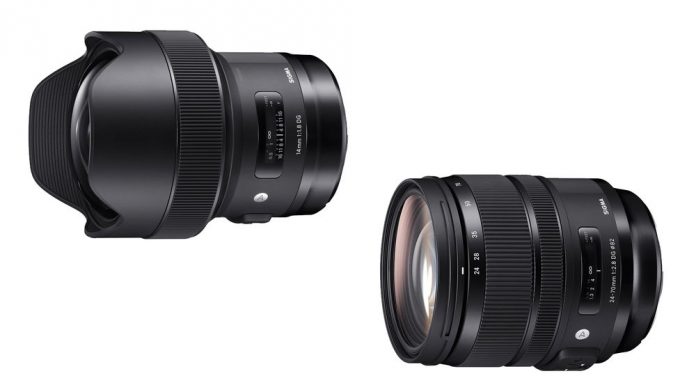 Sigma is kicking off the summer by announcing the pricing and availability for their new Art lenses: the 14mm F1.8 DG HSM and 24-70mm F2.8 DG OS.

Sigma boasts that the 14mm F1.8 Art will be the “first and only F1.8 ultra wide-angle lens among interchangeable lenses for digital SLRs” and the standard zoom full-frame 24-70mm F2.8 Art will “deliver a new dimension of visual experience.” It’s definitely clear that Sigma is very proud of these lenses and from what they’ve said their lenses will offer, they have a right to be proud.

Here’s the breakdown of each feature that Sigma has reported for their new Art Lenses:

Besides being the first F1.8 interchangeable ultra wide angle lens for digital SLRs and offering full-frame coverage, Sigma says this lens will minimize chromatic aberrations by using four SLD glass elements, resulting in “outstanding image quality from the center of the image to the edge.” In addition, Sigma says the 14mm f1.8 DS HSM will allow for a very shallow depth of field for sharp subjects in the foreground placed dramatically against a softened background. Sigma also says that the lens will effectively minimize distortion.

Sigma aims for this lens offers optimal image quality for ultra-high-megapixel DSLRs. It’s said to do this by using an optical system that ultimately minimizes coma, which can cause points of light to streak, and transverse chromatic aberration. Sigma also says that the optical system can minimize distortion.

This lens is said to have to capability to create beautifully creamy bokeh effect with only slight spherical aberration. “Since large-diameter zoom lenses are often used at wide-open aperture, Sigma has paid close attention to the shape of the bokeh, aiming for artistic circularity,” said Sigma in their press release for the lens.

Sigma also says that the lens can achieve extremely high resolutions by incorporating an aspherical lens element and can offer powerful stabilization by using its optical stabilizer.

Both of the lenses will be available in Canon, Nikon and Sigma mounts. And the Sigma and Canon mount lenses work with Sigma’s MC-11 Sony E-Mount converter.

For information about these lenses, visit sigmaphoto.com.