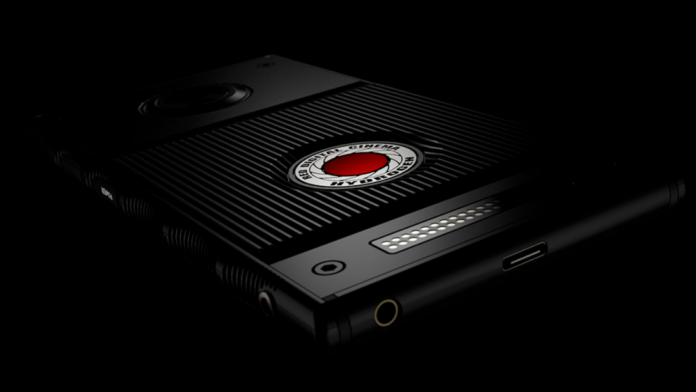 After RED Digital Cinema founder Jim Jannard teased REDUSER.net readers with a cryptic forum post at the end of last month, RED today announced the HYDROGEN ONE. The so-called “holographic media machine” is a brand new product in a brand new category — and not just for RED; the HYDROGEN ONE promises to introduce entirely new capabilities to personal communications technology.
Even post-announcement, it’s difficult to say exactly what the RED HYDROGEN ONE does. RED explains it as a “standalone, full-featured, unlocked multi-band smartphone” with some unique features that “shatter the mold of conventional thinking” — an audacious statement fitting the brand’s position as a trailblazing camera company. Still, the HYDRONGEN ONE, which will run on the Android OS, seems to sit outside RED’s wheelhouse.
The HYDROGEN ONE’s main selling point will be its 5.7-inch HYDROGEN Holographic Display, which RED claims will be able to switch seamlessly between tradition 2D content, stereoscopic 3D content and interactive games in both landscape and portrait orientations. Additionally, the HYDROGEN ONE will support virtual reality (VR), augmented reality (AR) and mixed reality (MR) viewing. And all of this will be possible without the use of a VR headset or 3D glasses.
More groundbreaking may be the fact that the HYDROGEN ONE will also use its advanced, nanotechnology-imbued screen to display holographic multi-view content, specifically content in the holographic RED Hydrogen 4-View (H4V) format. This is one feature we may need to see in action to fully appreciate.
To complement the advancements touted on the display side, the HYDROGEN ONE boasts a proprietary H3O algorithm said to convert stereo audio into multi-dimensional audio more suited to the immersive experiences the system promises to provide.
Media in the H4V format is still understandably scarce, but RED seeks to help users find content to view with the HYDROGEN ONE with the introduction of RED Channel, which will collect 4-View content in a single location and allow users to download, stream and  share H4V media.
RED positions the HYDROGEN ONE as the starting point for a new modular multi-dimensional HYDROGEN SYSTEM. The new modular component system with use a high-speed data bus to connect future attachments for shooting higher quality images along with images in the H4V holographic format. The HYDROGEN ONE is intended to be the core of this new system, but it will also be useful for RED camera users as a user interface and monitor.
Current pricing will likely change when the HYDROGEN ONE is officially launched in early 2018, but right now, RED is accepting pre-orders at 1,195 dollars for the Aluminum version and 1,595 dollars for the Titanium version. For more information, visit red.com/hydrogen.