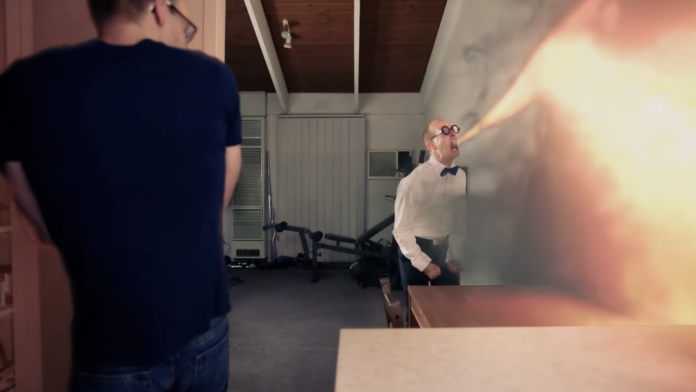 How’d you like to breathe fire like a dragon? I mean, that would be a pretty cool party trick to impress all of your friends. OK, we’re not going to teach you how to actually breathe fire, but Tobias from Surfaced Studio will show you how to make it look like you can in his video tutorial. He covers every step you need to create your own stunning fire breathing visual effect over his 30 minute video, using both SideFX Houdini to create the fire and Adobe After Effects CC17 for all compositing.

The video starts out with a view from within a cabinet. Tobias opens the door and reaches into the cabinet to a box labeled Walter’s cookies. It then cuts to Walter clearing his throat and looking at Tobias. Displeased with Tobias’s choice, he points to his eyes and then to Tobias, to infer “I have my eyes on you.” Tobias chooses poorly and opens the box. A livid Walter opens his mouth and breathes fire on the table next to Tobias. Tobias then quickly replaces the top of the box and puts it back into the cabinet. The scene fades to black.

As you can see by the title, this article is sponsored by Intel, just like Surfaced Studio’s video. Intel has launched this campaign to reach filmmakers, content creators and visual effects artist to talk about their new Intel Core i7 Processor Family and 750 Series SSDs. Throughout the video, Tobias puts these new Intel products to the test. In exchange for the video sponsorship, Intel gave Tobias a fully specced out PC loaded with these new Intel products.

I Have the Power!

Let’s start with his experience editing with the Intel Core i7 Processor. Created for X-Series platforms, they can have up to 25MB L3 Smart Cache and support up to 40 lanes of PCIe 3.0.

Intel touts that you can overclock with confidence with its up to 10 cores and 20 threads along with Intel® Turbo Boost Max Technology 3.0. Though the work he was doing was much more dependent on the GPU than the CPU, Tobias said processor excelled when rendering, editing and exporting simultaneously. Being able to multitask with multiple applications open will save time. Intel even says that the new processor is up to 25% faster when editing 4K video.

Next, when using the 750 series SSDs, Tobias put them up against a SATA 3 SSD. He found that, when transferring a project that was 62GB, the 750 series SSD wrote the data more than four times faster. The write took just one minute and 24 seconds versus the five minutes, 52 seconds to the SATA 3 SSD.

The Intel SSD 750 Series are great for fast application launches and file loading and ideal for content creation workloads. Experience four times the performance of SATA SSDs and sequential read speeds of up to 2,500MB/s. Get an industry-leading NVMe interface and 4 lanes of PCIe 3.0. You can even configure them with capacities of up to 1.2TB.

Overall, Tobias liked the performance of both the Intel Core i7 Processor and 750 Series SSDs. The SSDs created snappy application performance and allowed for quick file access. And the CPU wasn’t bogged down at all during the tutorial even with 4K footage and the VFX he created. Wouldn’t you like to create with ease like Tobias? Let Intel show you how.

Find out how you can win a rig powered by the Intel® Core™ i7-6950X processor Extreme Edition. https://vfxcreator.intel.com/