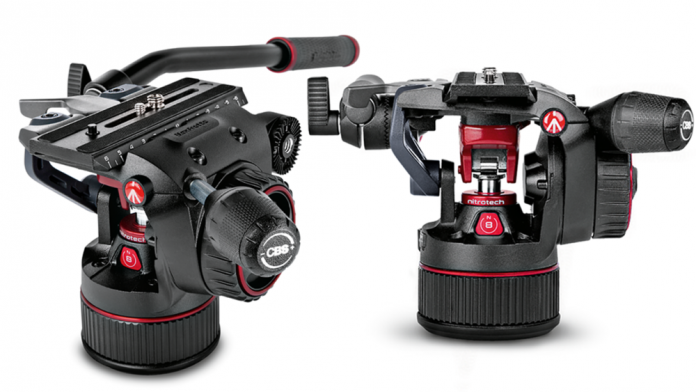 New to this year’s NAB is a Manfrotto tripod head which combines all of the features from the Manfrotto Video range — the variable fluid drag system, side lock sliding plate attachment, flat base and Easy Link connection technology — with an added breakthrough that provides continuous counterbalance: a nitrogen piston.

"The piston in the center, in counterbalancing the back weight of the camera, allows you to set your tripod where you need it," said Drew Geraci, founder of District 7 Media and a videographer whose recent commercial work includes ESPN’s X Games and the opening credits for Netflix’s House of Cards.

Geraci was among the first to test Nitrotech in its prototype phase, taking the 4.84 lb. head out for a day’s filming at the National Mall in Washington D.C., pairing Nitrotech with a Manfrotto slider and carbon fiber tripod.

"The pan [Nitrotech] allows is incredibly smooth," said Geraci. "And tilting is safe with the drag system, even with a heavy payload."

Video technology is evolving at an incredible clip. Camera performance is increasing; resolution is 8K crisp. Bodies are morphing, becoming more modular – today’s videographer expects to be able to attach multiple accessories such as a follow focus, external monitors and handles.

Nitrotech is the head which bridges the old and the new in high-end professional cameras. Professional-tested touches include:

Nitrotech debuted worldwide at NAB 2017 and is available for purchase at manfrotto.us and Manfrotto authorized dealers. Two tripod kits — an aluminum Manfrotto 546B twin-leg model and a carbon fiber 535 single-leg model — retail at $949.99 and $1,179.99, respectively. The head is offered on its own at a retail price of$449.99.