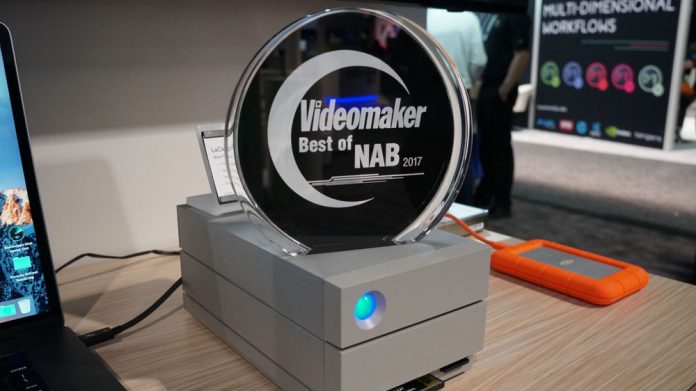 Congratulations to the LaCie 2big Dock, winner of our Best Storage of NAB 2017 award!

At NAB this week, LaCie detailed the next step for their 2big 2-bay RAID storage system. Now improved with Thunderbolt 3 technology, LaCie promises that their 2big Dock will offer the public faster speeds and even larger capacity with the 2big Dock.

The 2big Dock aims to simplify and centralize the desktop by allowing the 2big Dock to connect directly to a laptop, SD Cards, Compact Flash Cards and other devices.

“Creative professionals juggle massive amounts of data and tight timelines, so capacity and speed are critical. With up to 20TB of storage—a twenty five percent increase over the previous version—the LaCie 2big Dock offers professionals enough space for large video and photo libraries including up to 650 hours of 4K 30fps footage or 200,000 raw images,” said LaCie in their April 19th press release. “With speeds of up to 440MB/s, users can transfer one hour of 4K footage in one minute. It also means almost zero lag time when browsing photo libraries in Adobe Lightroom. Working with compressed 4K or HD footage, videographers can edit quickly and smoothly in Adobe Premiere Pro.”

LaCie says that the 2big Dock will feature 5-in-docking capability, USB 3.1 and dual Thunderbolt 3 connectivity, and up to 20TB storage space, adding 4TB compared to their previous model.

LaCie hasn’t released pricing for the 2big Dock, but they did say that the 2big Dock will be available for purchase in 12TB, 16TB and 20TB in summer 2017.

To keep up to date with information regarding the 2big Dock, visit lacie.com.