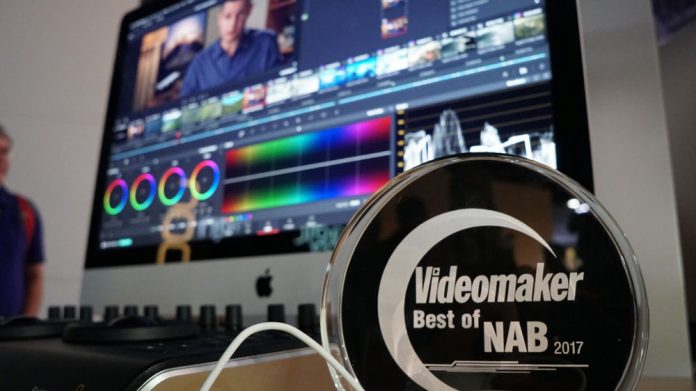 Congratulations to Blackmagic Design's DaVinci Resolve 14! The popular color grading and video editing software has earned our Best Software of NAB 2017 award!
DaVinci Resolve 14, currently in public beta, adds a wealth of new and improved features to its post-production toolset. Blackmagic claims their new playback engine will increase video editing performance by up to ten times. The engine promises faster playback, lower latency and faster UI refreshes, even when working in timelines with thousands of clips. This is on top of the already-robust video editing toolset, including a unique advanced trimming tool that changes function based on mouse position.[image:blog_post:64086][image:blog_post:64085]
New color tools in Resolve 14 will offer better control over skin tone adjustments with new filters along with facial recognition and tracking. The more than 20 new FX filters in Davinci Resolve 14 can also be used to remove dust, fix dead pixels and more.
Also new in DaVinci Resolve 14 Studio is a set of collaboration tools, including bin locking, chat and timeline merging. These new features are designed to allow multiple editors, colorists and audio editors to  work on the same project.[image:blog_post:64088]
In addition to improving its video editing and color tools, DaVinci Resolve 14 also adds new tools for editing audio with the inclusion of Fairlight Audio. With Fairlight, Resolve now supports real-time mixing of up to 1,000 audio channels along with Fairlight audio consoles. Audio editors will also gain control over equalization and dynamics and will have the ability to add third-party audio plug-ins in this new version.
Blackmagic DaVinci Resolve 14 is available now as a public beta. As always, the base product is free, while DaVinci Resolve 14 Studio, which adds collaboration tools, 3D editing tools and additional Resolve FX, is available for $300. For more information, visit blackmagicdesign.com.