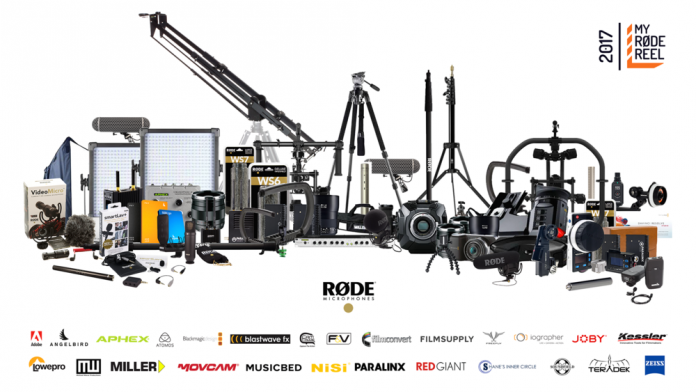 RØDE Microphones is currently accepting submissions for the fourth annual My RØDE Reel short film competition. The competition boasts close to 8,000 entries from 89 different countries, making it the world’s largest short film competition, and this year, My RØDE Reel has expanded its prize pool to include more than $500,000 worth of video production gear.
Prizes include equipment from Adobe, Atomos, Blackmagic Design, FilmConvert, Freefly, iOgrapher, Joby, Kessler Crane, Lowepro, Miller, Movcam, Musicbed, Red Giant, ZEISS and many more. Prizes from RØDE, of course, are also up for grabs. Most notable, RØDE is offering a new prize initiative this year for the major category winners — membership in the RØDE Directors Club. These lucky winners will receive every new Broadcast and Filmmaking category microphone that RØDE releases for the next three years before they even hit store shelves.
My RØDE Reel welcomes submissions from filmmakers at all levels. Entrants are required to create a short film of three minutes or less, as well as a behind-the-scenes reel that features a RØDE product being used during production.
This year, RØDE has expanded top award categories to include a Judges’ Film award, People’s Choice award, Young Filmmaker award and a Female Filmmaker award designed to encourage participation from women making films. The BTS award for the best behind-the-scenes film has been split into two categories: the Educational BTS Award and the Entertaining BTS Award. New genre awards in 2017 include Best Virtual Reality film, best 30-second Television Commercial for RØDE, and Best Vlog.
“We’re extremely excited to launch the fourth year of My RØDE Reel in 2017,” commented Damien Wilson, RØDE’s CEO. “The quality of the films we receive gets better every year. The inclusion of the Female Filmmaker category last year doubled the number of women shooting and submitting films – a feat we hope to repeat this year.
“The new categories – Best VR film, Best RØDE TVC and Best Vlog reflect the way creators are evolving the short film format. We are really excited about the possibilities these categories hold for us this year and into the future. And we couldn’t resist asking our talented customers for a cool RØDE TV commercial,” he continued.
My RØDE Reel is accepting entries now through June 30th, 2017. Complete details on the prize packs, award categories and competition rules are available at www.myrodereel.com. On the site, you’ll also find a free entry kit and instructions for submitting your film.