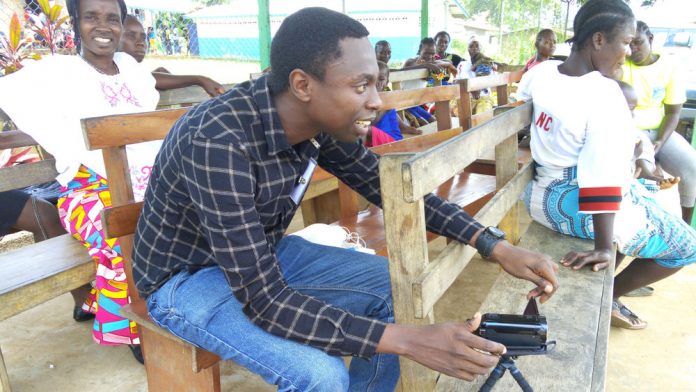 One Mobile Projector per Trainer (OMPT), a non-profit that revolutionizes how information is delivered to remote populations through tech-based solutions, has announced that it has selected the Canon Vixia HF R700 as its new dedicated camera model. OMPT trains organizations in the 50 poorest countries in the world to use video for poverty alleviation. Videos on topics such as disease prevention and agricultural training are shown to communities on battery-powered video projectors that can be taken to the most remote regions of the planet.

OMPT chose the Canon Vixia HF R700 because it is a high-quality, affordable model which includes a microphone jack. Canon is a leader in imaging solutions, and OMPT is thrilled to be able to use this superior product to make the world a better place.

The World Health Organization (WHO) in Liberia is the first OMPT partner to use the Canon Vixia HF R700. In October 2016, OMPT delivered 30 cameras and trained WHO Liberia to make videos about Ebola prevention that will be shown in rural villages on battery-powered video projectors. The videos cover topics such as proper hand-washing, how to identify symptoms of Ebola, and discouraging the consumption of bushmeat.

“These Canon cameras will be a game changer for the communications network in Liberia where it is critical that every man, woman and child see these messages,” said OMPT Executive Director Matt York.

In 2017, OMPT expects to bring these cameras to the Gambia, Tanzania, and Senegal for more life changing programs covering malaria prevention and teacher training.