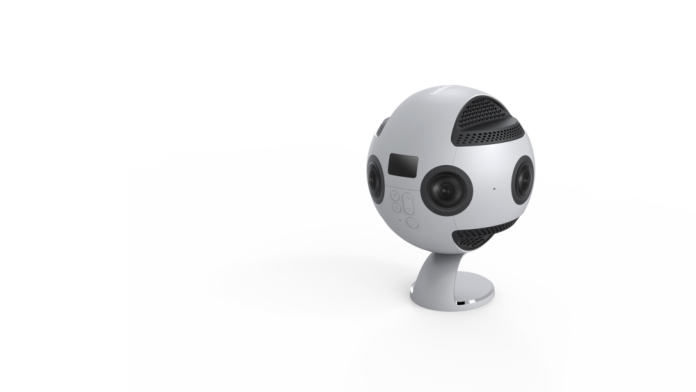 Insta360 announced at CES this week the launch of the Insta360 Pro, a professional-level 3D spherical video camera capable of recording at resolutions up to 8K.
“Insta360’s most advanced technology comes together in the Insta360 Pro, the most powerful, all-in- one VR and 3D content capturing platform that empowers you to create the unforgettable.
Never before has such power been put into an easy-to- use, compact system that enables users to share their VR content live with international audiences.” said Liu Jingkang, Insta360 CEO and founder.[image:blog_post:62851]
The Insta360 Pro uses six independent lenses to capture 8K 360-degree video and can record up to 100 frames per second when shooting in 4K. In addition, the camera is able to capture 3D spherical videos at up to 6K, or 4K in real-time stitching mode. [image:blog_post:62852]
Along with live video previewing capabilities, the Insta360 Pro boasts real-time image stitching for spherical videos up to 4K. For higher resolutions, videos can be stitched with Insta360 Studio. The camera also makes possible 4K spherical live streaming to any spherical live streaming platform via dedicated iOS and Android apps or over Wi-Fi, Ethernet of 4G.[image:blog_post:62853]
For photographers, the Insta360 Pro also capture 60-megapixel 3D spherical stills, with support for both HDR and RAW formats, and a spherical time-lapse mode is available, as well.
The Insta360 Pro is expected to sell for around $3,000 and will be available later in 2017.
Insta360 also offers the Insta360 Nano, which also captures a resolution of 3040×1520 at upto 30 fps using dual fisheye lenses. It’s available now for around $200.
https://youtu.be/nMbdSV12ev4
For more information, visit www.insta360.com.