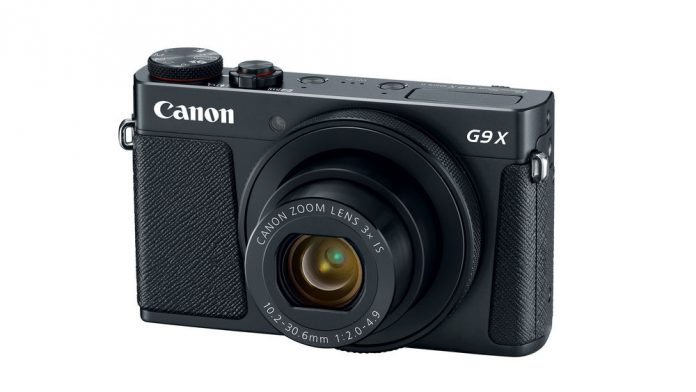 The PowerShot G9 X Mark II is billed as a premium point-and-shoot and features a 1-inch 20.2 megapixel sensor. The G9 X Mark II uses the new DIGIC 7 image processor to offer improved subject tracking and scene detection, and it’s the first PowerShot camera to come equipped with Bluetooth for easier photo sharing via your mobile device. The fixed lens covers a 28-84mm throw with a maximum aperture of f/2.0-4.9.[image:blog_post:62823]
With this photo-first camera, Canon hopes to appeal to photographers at all levels with tools like in-camera RAW conversion. The camera does, however, feature full HD video recording at up to 60 fps, Dynamic image stabilization and an improved Time-Lapse Movie Mode.
The Canon PowerShot G9 X Mark II is slated to be available in February 2017 and will go for $530.

With the Video Creator Kit, Canon caters to the vlogger on the go. The Kit includes the previously released PowerShot G7 X Mark II along with a back-up battery, a super-portable Manfrotto PIXI tripod and a 32GB Sandisk SD card.[image:blog_post:62822]
Like the G9 X Mark II, the G7 X Mark II features a 1-inch 20.2 megapixel sensor and DIGIC 7 image processor. The fixed lens features a 24-100mm throw with a max aperture of f/1.8-2.8. It can also record full HD video at up to 60 fps.
The Canon PowerShot G7 X Mark II is available now for $700. The Video Creator Kit will begin shipping in February 2017 for $750.

Along with these new PowerShot camera, Canon has also announced three new additions to the VIXIA family: the VIXIA HF R82, R80 and R800. All three feature 57x Advanced Zoom and the SuperRange Optical Image Stabilizer. The cameras use a 3.28 megapixel full HD CMOS sensor paired with the DIGIC DV4 image processor, allowing for full HD video recording at up to 60p. Also new to these models is Flexible Slow and Fast motion recording and support for the Canon Camera Connect App.[image:blog_post:62825]
The HF R82 includes 32GB of internal storage, while the HF R80 provides just 16GB. All three cameras record to SD cards, and the R82 and R80 support Wi-Fi and NFC connectivity.[image:blog_post:62824]
Each model includes a 3-inch touchscreen LCD, a high-capacity BP-727 battery pack and a lightweight, portable design. Like the other Canon cameras announced today, all three models will be available in February 2017. The Canon VIXIA HF R82 is priced at $500, while the R80 and R800 will go for $400 and $300, respectively.[image:blog_post:62826]

If you’re attending CES this year, expect something different at the Canon booth. In conjunction with a “Visionaries Welcome” themed booth, the company will showcase innovative products developed using Canon technology by Canon customers like Solidiphy, FoxTales, StyleShoots and Card Isle. Canon’s EOS, PowerShot, VIXIA, PIXMA imagePROGRAF and imageCLASS lines will also be on display during the show.
For more information, visit usa.canon.com.