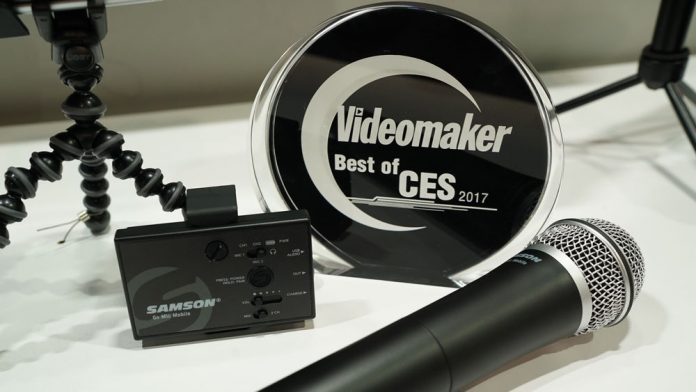 Congrats to Samson and the Go Mic Mobile, winner of Videomaker’s Best Microphone of CES 2017 award!
The Samson Go Mic Mobile is a 2.4 GHz digital wireless mic system touting low latency audio transmission which promises to eliminate video sync issues, making it a good choice for filmmaker and video producers. The dual channel receiver can mount either to a smartphone or to a camera via its cold shoe adapter.
The Go Mic Mobile has a 100-foot line-of-sight operating range and a frequency response of 10Hz to 22kHz. It’s available in three different wireless configurations: a handheld mic, a lavalier mic with beltpack or a shotgun mic. Flexible audio output options include switchable ?-inch headphone/line and USB audio outputs with volume control.
Samson promises the receiver will last up to six hours per battery charge. The Go Mic Mobile uses a built-in rechargeable lithium-ion battery as its power source.
The system is compatible with both iOS and Android devices and is able to connect directly to your device without an adapter. The Go Mic Mobile includes USB to Lightning, USB to mirco USB and micro USB to USB Type-C cables to connect to a range of devices. A USB charging cable, 3.5mm audio cable and power adapter are also included.
For more information about the Samson Go Mic Mobile, visit samsontech.com.