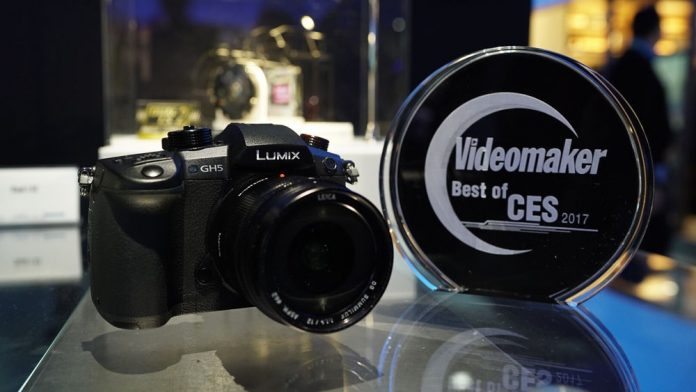 Congrats to Panasonic and the GH5 — Videomaker's Best Camera of CES 2017!
Panasonic this week officially announced the LUMIX GH5, the much-anticipated follow up to the popular GH4 and the new flagship for Panasonic’s LUMIX G DSLM line of cameras. The new Micro Four Thirds camera caters to both photographers and professional videographers and is able to capture 4K video at up to 60p.
Building on the legacy of the GH4, the GH5 promises the best image quality in the history of the LUMIX line. A new Digital LIVE MOS sensor increases pixel count by 25 percent to 20.3 megapixels over the GH4’s 16.05 and removes the low-pass filter, while the Venus Engine image processor promises additional improvements to image quality. The power of the new sensor and processor combine to allow for 4K video recording at up to 60p, and the GH5 can record 4:2:2/10-bit video internally in MOV, MP4 and AVCHD formats. There is no record limit in either 4K or 1080p and no cropping when shooting video versus photos.
https://youtu.be/JPxKZ2MWgdI
To improve the reproduction of detail, the GH5 adds Multi-pixel Luminance Generation, which references a larger area of pixel information during the de-mosaic process. Intelligent Detail Processing analyzes the characteristic of each pixel and applies optimum processing to provide even more detail while also suppressing false colors.
Complementing the camera’s enhanced ability to capture precise yet natural detail, Three Dimensional Color Control can detect brightness as well as hue and saturation to optimize color control and provide rich color reproduction within a greater dynamic range. High Precision Multi Process Noise Reduction adds more accurate noise identification for clearer images at higher ISOs.
https://youtu.be/2w7T2g8cZWs
Along with Cinelike D and Cinelike V picture styles, the GH5 adds the Like 709, and for cinema shooters, V-LogL is also available as a paid software upgrade. The GH5 also provides a built-in Waveform Monitor and Vector Scope for more precise monitoring.
https://youtu.be/vUgItk2J-bw
https://youtu.be/3hCyiMhuRmk
The Panasonic GH5 also features faster autofocus using improved Depth from Defocus and Contrast AF technology, achieving focus in around 0.05 seconds and allowing for up to 12 fps burst shooting. Further improving AF capabilities, the GH5 increases the number of focus areas from 49 to 225. The new Post Focus Function and Focus Stacking allow for even more focus control and manipulation in post.[image:blog_post:62864]
Along with an upgraded 4K PHOTO function, the GH5 also features the new 6K PHOTO function capable of extracting a 18-megapixel frame from a 6K burst file captured at up to 30 fps.[image:blog_post:62812][image:blog_post:62811]
Built for the field, the GH5 features a die-cast magnesium alloy frame with extensive sealing to make the camera splash-proof, dust-proof and freeze-proof down to -10 degrees Celsius or 14 degrees Fahrenheit. The camera supports recording to two SD cards and features a 3.2-inch free-angle rear touch screen.
The Panasonic LUMIX GH5 will be available in late March for around $2,000.