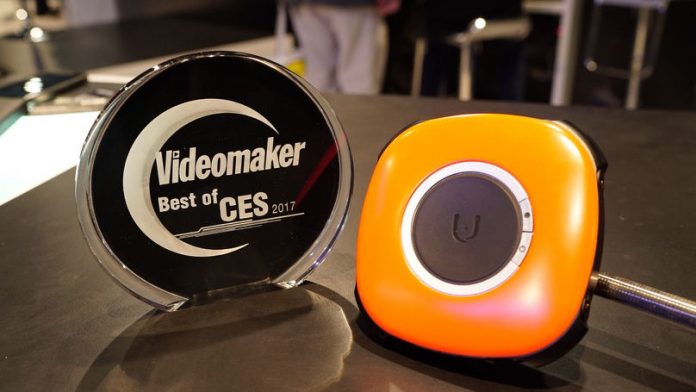 Congratulations to the Humaneyes with their Vuze 3D 360 Camera, winner of our Best Spherical Video Camera of CES 2017 award!
The Vuze Camera uses eight full HD lenses, each with a 180×120-degree field of view to capture 4K, 360-degree video at up to 30 frames per second at bitrates up to 120Mbps. The Vuze Camera can capture both 2D and 3D spherical stills and videos. Four MEMS 48Hz microphones producing 16bit PCM audio make 3D spatial audio recording possible with the camera, further immersing viewers into the spherical experience.
The camera records to a removable microSD card and is Wi-Fi enabled, allowing for remote control via the Vuze Camera app for Android or iOS. To stitch the images, Humaneyes VR Studio software uses a proprietary stitching technique to automatically generate your video, which you can then edit or enhance with effects.[image:blog_post:62868]
The Vuze Camera is compact and light enough to carry with you and the simple, one-button interface means straightforward operation. It also comes in a variety of colors.
The Vuze Camera by Humaneyes  is available for pre-order for $800. The camera is expected to beginning shipping in the first part of 2017. For more information visit vuze.camera.