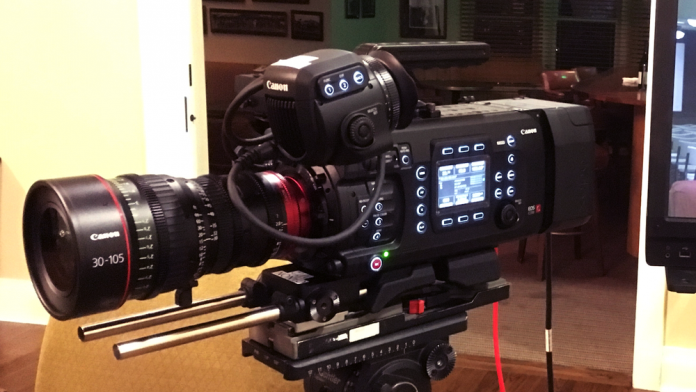 The American Society of Cinematographers (ASC) Clubhouse sits unobtrusively just a block off from the madness that is the Hollywood Walk of Fame. As the first organization devoted to furthering and honoring professional achievement in the film industry, it was an obvious setting for hosting the first appearance of Canon’s new professional cinema cameras: the EOS C700, EOS C700 PL and EOS C700 GS PL.
Eliott Peck, Chairman and CEO of Canon Information Technology did the honors. He corralled the crowd brought in to witness this evolution of the Cinema EOS family, and exhorted them to stop gawking at the cameras which had been placed throughout the Clubhouse and take their seats for a short presentation. It was time to get down to the specifications. He began by pointing out that the cameras featured a completely new, customizable and modular design able to handle any type of filmmaking — be that feature or documentaries, episodic or streaming. He then went into specifics: The EOS C700 and EOS C700 PL have a Super 35mm 4.5K sensor with wide dynamic range suitable for 4K UHD TV or 4K DCI cinema productions, and the EOS C700 GS PL’s Super 35mm 4K sensor is coupled with a global shutter for capturing high speed subjects distortion-free.
Referencing High Dynamic Range (HDR) content, both the EOS C700 and EOS C700 PL are able to deliver 15 stops of latitude an use Canon’s proprietary Log Gammas (Canon Log3, Canon Log2 and Canon Log) and renowned color science. Through a partnership with Codex, there is a fully integrated recording and workflow option: by combining the EOS C700 with Codex’s CDX-36150 recorder, high speed 4.5K RAW recording can be done at up to 100 fps (frames per second), with 4K RAW at up to 120 fps, 4K ProRes at up to 60 fps, 2K ProRes at up to 240 fps and XF-AVC at up to 60 fps.[image:blog_post:62332]
Formats supported by the cameras include the earlier available XF-AVC2 and RAW, plus now Apple’s ProRes. And in a first for the Cinema EOS cameras, all three cameras support anamorphic shooting to allow for images to have the 2.39.1 aspect ratio typical of cinema productions.
Additionally, the EOS C700 can be converted between EF and PL mounts, and between a standard CMOS image sensor and a global shutter CMOS image sensor. The EF mount provides compatibility with Canon’s 70+ interchangeable EF lenses and can be used with Canon’s  Dual Pixel CMOS AF technology. In the case of the EOS C700 PL and EOS C700 GS PL, industry-standard PL lenses are usable, as is Cooke /i metadata communication technology.
Having wowed the crowd with details, Peck showed a short film called “The Calling, A Portrait of Life in the High Country,” which demonstrated  the clarity, precision and abilities of this latest addition to Canon’s line. This was followed by camera demos which seamlessly integrated Canon’s professional 4K displays including the DP-V2420, DP-V2410 and DP-V1710). [image:blog_post:62330]
Also introduced were optional accessories for the cameras; the OLED 1920×1080 Electronic View Finder EVF-V70; the Remote Operation Unit OU-700; the Shoulder Support Unit SU-15 and Shoulder Style Grip Unit SG-1; and B4 mount adapters MO-4E/MO-4P.
The EOS C700 and EOS C700 PL are expected to go on sale in December, with the EOS C700 GS PL available in January, 2017. The list price for the EOS C700 or the EOS C700 PL is to be $35,000, with the list price for the EOS C700 GS PL at $38,000. For more information, visit cinemaeos.usa.canon.com.