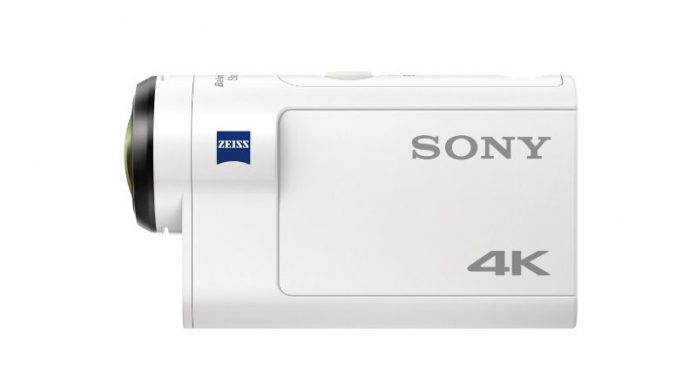 Sony today added two new cameras to their action cam lineup — the Sony FDR-X3000R and the Sony HDR-AS300R. The X3000R replaces the FDR-X1000V as Sony’s flagship 4K action camera while the AS300R takes the reigns as Sony’s flagship HD action camera. Both new models feature new enhanced image stabilization with Sony’s Balanced Optical SteadyShot, or B.O.SS. These are Sony’s first action cameras to use this technology.
Integration of B.O.SS technology means that, inside the camera, lens and sensor are joined so that they moved together as one unit to compensate for camera shake — a particularly effective method for action cam applications.
For improved image quality, the X3000R and AS300R both feature a new Zeiss Tessar lens that promises to reduce lens distortion, as well as a new back-illuminated Exmor R CMOS sensor and BIONZ X image processor. With these, the new cameras use the full pixel readout without pixel binning, allowing for higher resolution and more accurate color reproduction.[image:blog_post:61854]
Both cameras offer high-frame rate recording for smooth slow motion, with 120 fps at 1080p possible with the X3000R and 120 fps at 720p available using the AS300R. Additionally, both cameras now allow for 3x smooth zoom and have presets for wide, medium and narrow field of view settings.
For capturing audio, the X3000R and the AS300R both feature a stereo mic with wind noise reduction built-in, or you can connect your own microphone via a stereo microphone input.
Other features include built-in GPS, expanded manual controls,loop recording a new Time-lapse Capture feature for producing 4K time-lapses. The new cameras also offer Highlight Movie Maker, a built-in movie creator that can automatically assemble your best clips into a highlight video with custom music.
Like previous models, the FDR-X3000R and HDR-AS300R action cams are splashproof without a housing and waterproof to depths of 197 ft (60 m) with the supplied Underwater Housing.
Along with updates to the action cam lineup, Sony also introduced a smaller Live-View Remote, which will be offered as part of a kit along with the new action cameras. In addition to a more compact design, the new Live-View Remote will offer a more in-depth menu promised to be easier to navigate and customize, as well as a new Wi-Fi high power mode, allowing for communication with the camera across larger distances.
Also announced today are new optional accessories including the Finger Grip (AKA-FGP1) and the MC Protector (AKA-MCP1) for added lens protection.
The new Sony FDR-X3000 will be sold for about $400 alone or $550 in a kit with the new Live-View Remote. The new Sony HDR-AS300 will be available for about $300 or $450 with the Live-View Remote. Both are scheduled to be available in North America in late September.
For more information, visit www.sony.com.