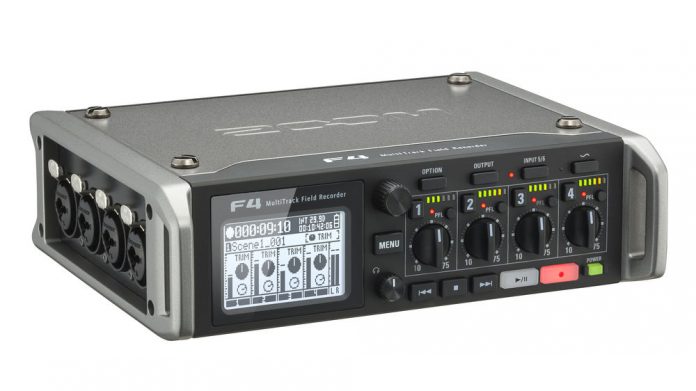 Following last year’s release of the Zoom F8, Zoom North America today announced their newest multitrack field recorder, the Zoom F4. This 6-input/8-track field recorder includes four low-noise mic preamps and promises high-quality audio recording at a price-point more accessible to the independent filmmaker or videographer.
http://youtu.be/PaLSlvMu2v0
The Zoom F4 can record to up eight tracks from six total inputs at resolutions up to 24-bit/192kHz. Inputs include four locking Neutrik XLR/TRS combo connectors, a 3.5mm stereo input and a Zoom mic capsule input. Output options include two Main Outs and two Sub Outs in addition to a ¼-inch headphone jack with a dedicated volume control. The F4’s onboard mixer and effects allow for signal routing from all inputs to all outputs and controls for level, pan and delay, as well as high-pass filtering for wind noise reduction.[image:blog_post:61813][image:blog_post:61815]
As part of the effort to make audio tools affordable to the independent producer on a budget, the F4 features high-quality mic preamps with up to 75 dB gain, less than -127 dBu EIN and +4 dB line inputs. Phantom power is also available on each of the four preamps, and a Temperature Compensated Crystal Oscillator (TCXO) offers super accurate time code down to .2 ppm. [image:blog_post:61814]
Additionally, the F4 offers onboard limiting, which can be applied to all four channels simultaneously and features 10 dB of headroom and adjustable threshold, attack and release controls, catering to those working in recording environments where sound levels can be unpredictable. [image:blog_post:61816]
Despite it’s durable metal housing, the F4 weighs in at just 2.27 pounds without batteries and measures 7” x 5.5” x 2.1”. Dual SD card slots allow for simultaneous back-up or split recording to SD, SDHC or SDXC cards with capacities of up to 512 GB each. For further peace of mind, the F4 saves files while recording to prevent data loss upon sudden power loss or SD card removal. A 1.9-inch white backlit monochrome LCD promises to clearly display recording settings in any environment.
The F4 can be powered via 8 AA batteries, an external DC battery pack or the included power supply and adapter.
The Zoom F4 is set for an October 2016 release and will be prices at $650. For more information, visit zoom-na.com/F4.