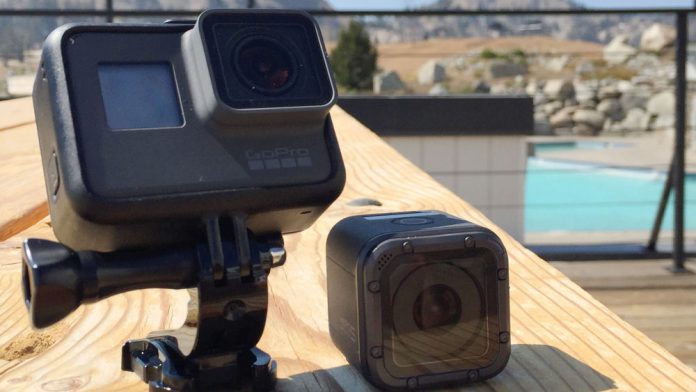 Starting with the the HERO5 Black, key features include a 2-inch touch-sensitive display, a waterproof housing, stereo audio and image stabilization (digital, no 4K). Unfortunately video specs aren’t noticeably updated. The HERO5 Black still shoots 4K video at 30 fps; we would have liked to see an upgrade to 60 fps. Other interesting new features include voice control, GPS and a new photo raw format
The HERO5 Black has an MRSP of $399.

The smaller HERO5 Session saw a notable upgrade in that it now shoots 4K video. Like the HERO5 Black, the HERO5 Session has image stabilization and and is voice activated. Other than those two features, the Session appears generally unchanged. The HERO5 Session does not replace its predecessor and will hit the shelves for $299.

Lastly we have Karma, the announcement we were all hoping for. We’ve waited far too long for a viable competitor for DJI, and we hope this is it. Karma will use a standard GoPro as its camera and comes pre-packaged with a removable gimbal and handle. It’s clear that GoPro is taking direct aim at DJI with the handle’s inclusion. GoPro is essentially selling a package that would fill all the roles that a DJI Phantom 4 and OSMO fill together.
http://www.youtube.com/watch?v=CjNjcrQZtd8
Unlike most drones, Karma puts the camera out in front of the drone. Doing this keeps propellers out of the shot and keeps the drone itself extremely compact. We’re also anticipating being able to take video shooting upward, but it’s unclear how the Karma will shoot backward, if it will at all.
Speaking of compact, Karma’s propeller arms and landing gear fold inward. GoPro hopes that this folding design and the included backpack case will make Karma a go-to drone for adventurers who need to travel light.
[image:blog_post:61919]