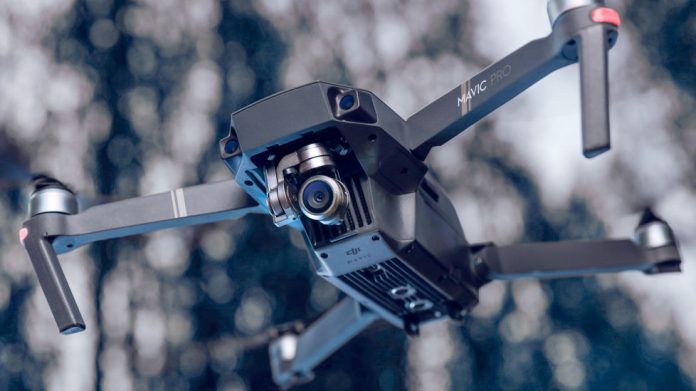 So  do you want to fly? Do you want to tell stories from the sky?
Drones are fun, but flying a drone can be difficult — you need extra hands to pilot the craft in the right direction, while also keeping the camera pointed at the subject, and, by the way, avoiding accidentally running into obstacles like trees and wires.
Wouldn't it be so much better if the drone could just fly itself? You could press a button, and it would jump into the air, hovering in place even in winds up to 24 mph. Then just tap on the controller screen, and it would fly to the selected destination while automatically avoiding obstacles in its path.[image:blog_post:61984]
Or you could have it automatically follow you, even while you are in motion — You select a target on the controller display, and the drone would stay in position behind, or in front, or to the side, or orbiting in a circle — or it could keep the camera locked on target as you fly it around. Even better, you could set the drone at a fixed distance over ground, and it would maintain that relative height even as you navigate changing terrain.
Then, when you are done — or the batteries start running low — the drone could automatically return to home, flying back from wherever it ended up to settle down precisely on the original launching spot.
Oh, and of course the drone would record video up to Cinema 4K resolution, 4096×2160 at 24p, and stream live video back to your controller at up to 1080p so you can monitor the scene — all from a distance of over four miles away.
And just to make the story perfect, this drone would be foldable, so it packs down to 3.25 x 3.25 x 7.8 inches — something like the width of a wallet by the height of a water bottle.
What we have just described is the promise of the new DJI Mavic Pro drone.
http://youtu.be/p1d_ptE6yrc

Yes, the most obvious feature of the newly-announced Mavic Pro is that it folds down to smaller than a backpack — It's more of a size to fit in a bag or purse, with a total weight of 1.64 pounds — a bit more than 1 1/2 500mL bottles of water. It just takes a few seconds to pack up; you simply fold the front arms of the drone into the top of the body, the back arms into the bottom, and rotate the rotors together flush with the arms.[image:blog_post:61985]
But the Mavic is not just a more compact version of the DJI Phantom line. It's also a significant advance in technology, particularly in automated flying, but also including batteries promising up to 27 minutes of flight time.[image:blog_post:61981]
The DJI "FlightAutonomy" design runs computer vision software with a multitude of sensors, including five cameras — the main camera, plus dual forward and downward sensors for stereo vision — dual-band satellite positioning for GPS and GLONASS navigation, two ultrasonic range finders, and two compass and Inertial Measurement Unit sensor pairs for redundancy.[image:blog_post:61986]
Besides the additional subject tracking and terrain following modes, the Mavic Pro also has a new Tripod mode that slows its movement for more precise positioning and framing, which is also especially useful indoors in restricted spaces. This is in addition to the high-speed Sports mode, for racing drones at up to 40 mph.[image:blog_post:61987]
DJI has also leveraged the vision capabilities even further by introducing a Gesture mode. Now you don't even need to be messing with the controller; you can use arm and hand gestures to, for example, have the Mavic start tracking you or take a photo just by holding up your arms and connecting the thumbs and index fingers of your two hands to make a rectangle.

You can control the Mavic Pro using its new compact remote controller, which weighs about half a pound and includes a built-in LCD display and dedicated function buttons. And you can control it from your smartphone's touchscreen.
Like other DJI products, the Mavic will also be able to live stream the video to Facebook Live, Periscope, and YouTube Live through the DJI GO app. The app also allows you to edit and share saved videos, adding a soundtrack with the music automatically synced to the video before uploading to social media sites.

Meanwhile, GoPro also recently announced its own foldable drone, the GoPro Karma. From a big picture point of view, you can think of the Karma as a camera-less drone body that you can use to fly a GoPro HERO5 or 4 camera and associated stabilizing mount. This means you can also use your GoPro equipment separately by detaching the camera and stabilizing grip. The Karma body starts at $799, and the full drone is $999 with the HERO5 Session camera (due in early 2017) and $1099 with the HERO5 Black.
In comparison, again at a high level, the DJI Mavic Pro, with its dedicated camera and mount, folds down smaller and lighter, can fly faster and farther, and has much more sophisticated tracking and obstacle avoidance capabilities. On the other hand, the GoPro Kama has the advantage of a detatchable gimbal and compatibility with the GoPro ecosystem. Without having much experience with either drone, all we can say at this point is that the timing and similarity of these releases is certainly interesting.

In addition to the Mavic, DJI also is releasing the DJI Goggles, to immerse you in the aerial view with dual 1920 × 1080p LTPS displays with a wide 85 degree angle of view, displaying full 1080p video.
These connect directly to the Mavic, and not through the controller, for lower latency. Even better, the video (and data) stream from the Mavic can be connected to multiple devices, so you can share the view with a second set of the Goggles, or control the drone with a second remote.

The DJI Mavic Pro is priced at $999 with the remote controller, or $749 without the remote. Additional batteries are $89. Pricing on the Goggles has not been announced.
DJI also is offering the Fly More Combo bundle for $1299, including the Mavic Pro, two extra batteries, extra propellers, charging accessories, and a shoulder bag.
DJI is taking pre-orders now, and will begin shipping October 15.
When you order, you also can add the new DJI Care Refresh optional protection plan for $99. This is a prioritized replacement service that covers accidental damage to the Mavic Pro aircraft, gimbal, or camera during normal use for up to 12 months.