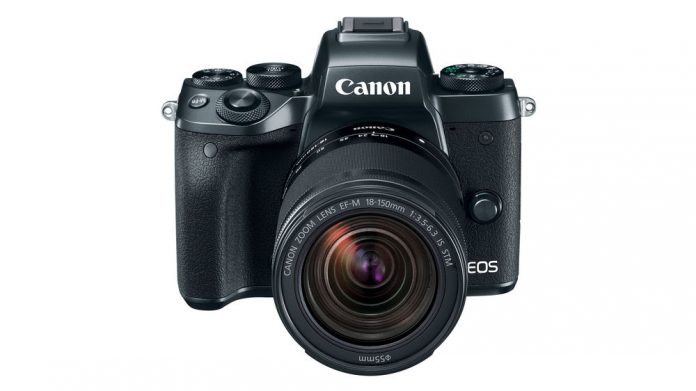 Canon today announced two new lenses and their latest mirrorless camera, the Canon EOS M5. The new M5, the latest addition to Canon’s mirrorless M line, features a 24.2 Megapixel CMOS APS-C sensor with an ISO range of 100 to 25600. The M5’s DIGIC 7 Image Processor allows for continuous still shooting at up to 7.0 fps or up to 9.0 fps with AF Lock. The camera shoots video at resolutions up to 1080p at up to 60 fps in MP4 format.
With the new M5, Canon seems to be making an attempt to placate their videographer fans, including features like a built-in high-resolution electronic viewfinder, Canon’s popular Dual Pixel CMOS autofocus and 5-axis digital image stabilization when shooting video. The M5 also features a touch screen 3.2 LCD monitor, tiltable from 85° up to 180° down and Wi-Fi and NFC connectivity, as well as Bluetooth Smart technology— a first for the EOS M line. The M5 is compatible with EF-M lenses as well as the full line of EF and EF-S lenses with an adapter.[image:blog_post:61892]
However, despite these improvements, those hoping to see Canon release a true competitor to similarly priced mirrorless cameras like the Sony a6300 will be disappointed. The EOS M5 not only lacks 4K video shooting capabilities, it’s also missing both microphone and headphone jacks, forcing video shooters to record audio to a separate device when clean sound is needed.
http://youtu.be/QM2MgR1AZ_M
The Canon EOS M5 is scheduled be available in November 2016 for around $980, and at that time will be sold as part of a kit with the EF-M 15-45mm/F3.5-6.3 IS STM zoom kit lens for around $1,100.
Also announced today are two new lenses, the EF-M 18–150mm f/3.5–6.3 IS STM, a companion to the new M5, and the Canon EF 70-300mm f/4.5-5.6 IS II USM.[image:blog_post:61890]
The EF-M 18-150mm is Canon’s first EF-M high-zoom power lens with a high-zoom ratio of up to 8.3x. That’s a 29–240mm 35mm equivalent. This lens also features an Image Stabilizer effect at up to 4 stops of shake correction. It’s slated to be available in December 2016 for around $500. It will also be offered in a kit with the new M5 for around $1,480, also available in December.[image:blog_post:61891]
More exciting to video shooters will be the Canon EF 70-300mm. This new lens uses Canon’s NANO USM technology, which promises near-silent autofocus when shooting video. Other features include a new lens information display showing focusing distance, focal length and shake  amount, an ultra-low dispersion (UD) lens to reduce chromatic aberration and, like the new EF-M lens, an Image Stabilizer effect at up to 4 stops of shake correction. A 9 blade circular aperture should offer pleasing bokeh, while full-time manual focus let’s you manually adjust focus, even when in AF mode.
The Canon EF 70-300mm F/4.5-5.6 IS II USM lens is scheduled to be available in November 2016 for around $550.
For more information on these new releases, visit www.usa.canon.com.