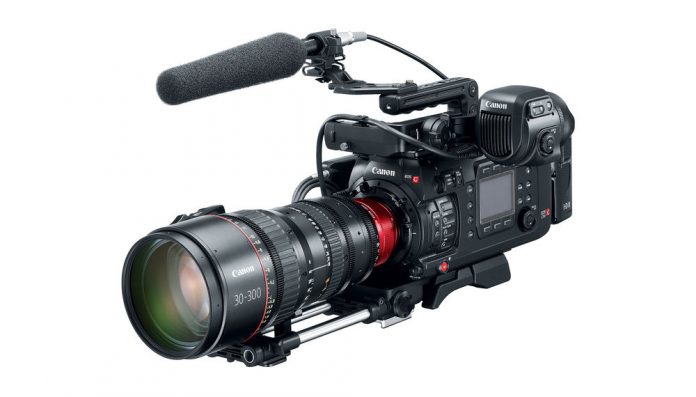 Canon this week announced two new 4K cameras, expanding their Cinema EOS line with the EOS  C700 and following up on their XC10 fixed lens camera with the XC15.
The new XC15, a 4K UHD digital video camcorder, which aims to capture high-quality images in a lightweight form factor.
The new Canon XC15 builds on the design of the previously-releases XC10 and features an XLR input via the included MA-400 microphone adapter. Also includes are a series of "Look" modes, including modes aimed at matching the look of other Canon professional cameras, making it easier to mix footage from different cameras in the same project.
The XC15 houses a high-sensitivity one-inch CMOS sensor and DIGIC DV 5 image processing platform, enabling the capture of high-quality, low-noise 4K UHD video. [image:blog_post:61781]
The XC15’s lightweight body weighs about 2.1 pounds and measures in at approximately 5.0 x 4.1 x 4.8 inches. A 10x optical zoom lens allows for flexible shooting in a variety of production environments.
The Canon XC15 should be available later this month, September 2016, with an MSRP of $3,000.
For DPs at the top of the production ladder, Canon also introduced the C700, which boasts a completely new modular design that promises to find a home in a variety of production styles. The camera features a Super35mm 4.5K CMOS image sensor with Canon’s Dual Pixel CMOS AF technology.
http://youtu.be/6nhrG48Y86Y
Users of the EOS C700 will be able to convert between EF and PL mounts and between a standard CMOS image sensor and a global shutter CMOS image sensor at Canon service facilities.
Like the EOS C700, the EOS C700 PL features the standard Super 35mm 4.5K sensor while the EOS C700 GS PL features a Super 35mm 4K sensor with a global shutter — great for quick-moving subjects and fast pans.
The EOS C700 and EOS C700 PL both promise 15 stops of dynamic range, with the GS PL achieving up to 14 stops. All three cameras feature Canon’s proprietary Log Gammas — Canon Log3, Canon Log2 and Canon Log and will support both XF-AVC Apple ProRes recording.[image:blog_post:61783]
In-camera recording to CFast media allows for frame rates of up to 60 fps in 4K, 120 fps in 2K or Full HD and 240 fps in Full HD when in crop mode. When paired with the optional Codex CDX-36150 recorder, the C700 is capable of high-speed 4.5K RAW recording at up to 100 fps, 4K RAW at up to 120 fps, 4K ProRes at up to 60 fps, 2K ProRes at up to 240 fps and XF-AVC at up to 60 fps.
To help users achieve a more cinematic look, the new C700 cameras are the first Cinema EOS cameras to support anamorphic shooting for capturing images with a wide 2.39:1 aspect ratio.
The EOS C700 and EOS C700 PL are slated to be available in December 2016, while the EOS C700 GS PL will be available in January 2017. The C700 and C700 PL will each have a list of $35,000 while the C700 GS PL will have a list price of $38,000.
For more information, please visit usa.canon.com.