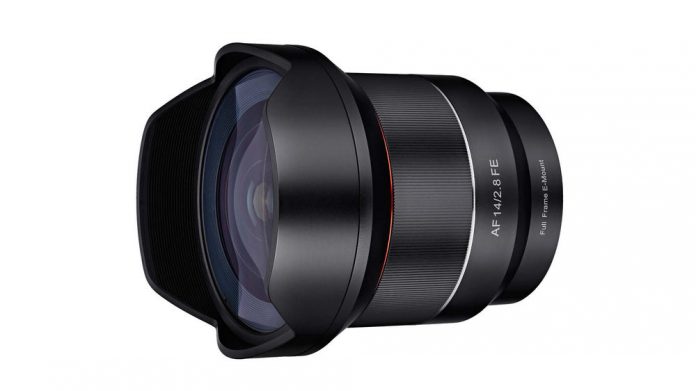 This week, Rokinon launched their new 14mm F2.8 AF Full Frame lens for Sony E-mount. This new release comes on the heels of their 50mm F1.4 AF Full Frame lens, also for the Sony E-mount. The new lens features internal focusing, ergonomic design and focusing as close a 7.9 inches (0.20m). Rokinon identifies this autofocusing ultra-wide prime as the widest lens in its class.[image:blog_post:61676]
This 14mm F2.8 has been specifically designed for use with the Sony E-mount in mind, taking into consideration the unique rear element to sensor distance of in cameras with that mount. With a fast f/2.8 maximum aperture, the Rokinon 14mm F2.8 AF promises good low light performance and the shallow depth of field desired by many filmmakers hoping to achieve a more cinematic look. Its internal focusing (IF) autofocus system is compatible with both phase detect and contrast detect sensors for fast, quiet and accurate focus detection.
The new lens also features UMC anti-reflective coatings along with three Aspherical and two ED lens elements. Together, these work to mitigate chromatic and spherical aberrations for improved clarity, contrast and color reproduction. Rokinon also promises high resolution from the center to the corners of the image. [image:blog_post:61673]
The Rokinon 14mm F2.8 AF is constructed for durability with an all-metal housing, a user-friendly grip and a built-in lens hood. In addition to Full Frame E-mount cameras, the new lens is also compatible with APS-C-Sony E-mount cameras, where it will provide an equivalent focal length of 21mm.
Here’s a look at the full specs:
The Rokinon 14mm F2.8 AF Full Frame ultra-wide for Sony E-Mount can be preordered now from authorized Rokinon dealers with an MSRP of $899. For more information, visit rokinon.com.