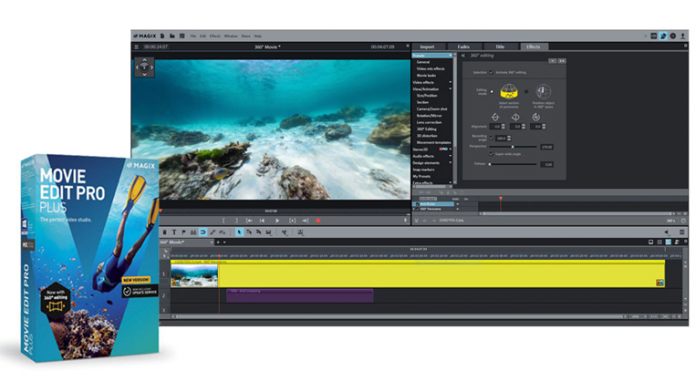 360-degree panoramic video is a new and exciting way to capture the world around you. New cameras can record all 360 degrees of a scene simultaneously with full-motion video. This footage can then be viewed on a computer or on mobile devices  smartphones or tablets, where the viewer is able to alter the view by panning and rotating the device. But while this makes for a simple procedure for viewing, that has not been the case when it comes to editing 360-degree video. That is, until now, thanks to Magix’s Movie Edit Pro Plus’ new 360-degree video editing features.

Being a complete all-in-one movie studio package for the PC, with added tools/features as compared to the standard edition, Movie Edit Pro Plus enables editing of 360-degree material as well as the positioning of objects in 360-degree space. Final output can be exported for display on a VR headset as well as integrated into a 2D video for viewing as a traditional video on a TV, computer monitor or mobile device.

The Edit screen consists of two main areas at the top: the Preview monitor at the left, where video and image objects are displayed and files from the Media Pool are previewed, and the Media Pool at the right, where content on the hard drive can be accessed along with transitions, titles and effects. Sections below these two main areas include the Timeline, which offers range markers for defining the range that will be played and comes equipped with a time scale;a lower toolbar for selecting the Timeline and different mouse modes for the various editing functions; and a Project window in Timeline mode for dragging and dropping files from the Media Pool prior to arranging and editing files in detail.

Editing 360-degree video is roughly similar to editing traditional video, with clips being manipulated and effected in the usual way. There are of course some exceptions to consider, such as avoiding slides and wipes as well as image stabilization as these can cause unwanted effects.

360-degree editing features are found in the Media Pool under Effects >View/Animation>360° editing. The process begins by using one of two editing effects. The first option, Select section from panorama, works by displaying a spherical panorama as a sphere. Select the 360-degree object in the arranger, click on 360° Editing under Effects>View/Animation, then activate 360-degree editing by choosing Select section from panorama. This allows looking in all directions with the section currently seen able to be added into a traditional video. Camera moves are added in using key frames.

The other editing mode — Position objects in 360-degree space — enables titles and 2D graphics, photos or videos to be placed inside 360-degree panoramas. Create the object — for example, a title — select it and activate 360° editing, click on 360° Editing under Effects>View Animation and select Integrate object in 360° panorama.

The spherical nature of 360-degree video causes it to look distorted when displayed in a normal video frame with a 16:9 or 2.1 ratio. Anyything other than simple cuts requires using the 360 Display mode through the program monitor. There, you click on the control wheel arrows or drag and scroll with the mouse to move through the 360° panorama. Look to the inside of the control wheel to see how the direction and angle of the view is changing.

With a de-skewed section of the spherical video displayed, movement through the 360° space is possible. This more accurately shows how the video will look on Facebook, YouTube, etc. As some editing features — adding titles for example — are not active while in the 360 Display mode, the procedure is to first make those edits in the standard 2D view and then switch back to 360 Display mode to see what’s been accomplished.

To export the finished 360-degree video, select Video as MPEG-4 from File>Export Movie. Here you’ll find 360-degree panorama presets among others, enabling the program to automatically create a project wherein the video is properly formatted for VR headsets.
Movie Edit Pro Plus (also known as Video Deluxe Plus in parts of Europe) requires a PC running Windows 7/8/10 (64-bit) with a Dual-core 2.4GHz processor (Quad-core 2.8GHz or better for 4K/HD), 2GBs of Ram (8GB for 4K/HD) and 2GBs of hard drive space, a graphic card with a minimum screen resolution of 1280×1024 (dedicated graphics card w/512MB VRAM or more for 4K/HD), an optical drive and an internet connection. To learn more, visit magix.com