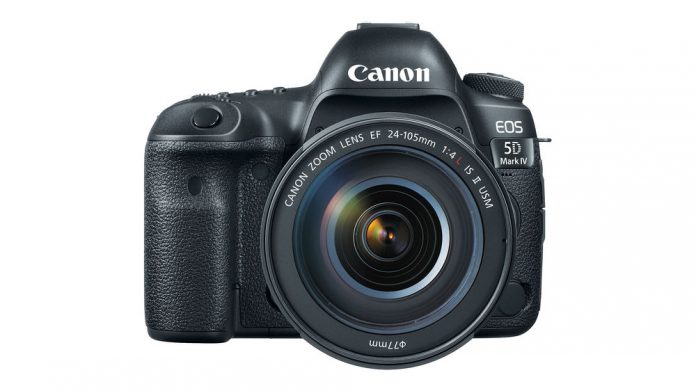 Finally, more than four years after the release of the celebrated 5D Mark III, Canon today revealed details for the highly-anticipated 5D Mark IV. To answer what is sure to be the number one question on the minds of Canon enthusiasts, yes, the 5D Mark IV will shoot 4K video — DCI 4K in fact, with resolutions up to 4096 x 2160 at 30p or 24p.
http://youtu.be/l88K4DcvpEM
The next question you might have about this full frame DSLR is whether the sensor is cropped for 4K shooting. And the answer is, again — sadly this time — yes. Like the Mark III, the 5D Mark IV features a full frame sensor, but there is a 1.74x crop factor when shooting 4K. That’s a bit better than the Panasonic GH4’s 2.3x crop factor, but it’s still a little disappointing for Canon-lovers looking for an answer to cameras like the Sony a7S II. Also missing from the Mark IV are any log shooting options. [image:blog_post:61707]
This new camera isn’t perfect, but that doesn’t diminish the excitement surrounding its release. We’ve speculated about this camera for so long, forecasting unrealistic features has become a running joke while the fabled 5D Mark IV has reached an almost mythical status. But here it is, at long last.
“Canon’s EOS 5D series of DSLR cameras has a history of being at the forefront of still and video innovation. And today, we add to this family of cameras the EOS 5D Mark IV – the first in our 5D series to offer 4K video and built-in Wi-Fi and NFC connectivity,” said Yuichi Ishizuka, president and COO, Canon U.S.A., Inc. “In developing this new DSLR camera, we listened to the requests of current EOS users to create for them a modern, versatile camera designed to help them create and share beautiful still and video imagery.”
http://youtu.be/3adkZenmIC8
The new 5D Mark IV features a new 30.4MP full-frame CMOS sensor paired with the DIGIC 6+ Image Processor, allowing for 4K Motion JPEG video capture at 500Mbps. For photography, the camera is capable of up to 7 frames per second continuous shooting. You can also grab 4K 8.8MP still frames in camera. In addition to 4K, the 5D mk IV also records Full HD 1080p video at up to 60 fps, with frame rates up to 120 fps available in 720p. The new 5D’s ISO range of 100–32,000 is expandable up to 50–102,400.
The 5D Mark IV makes use of Canon’s proprietary Dual Pixel CMOS AF system, a 61-point High-Density Reticular AF II system with up to 41 cross-points. The system is similar to that of the Canon 1D X mk II and promises reliable autofocusing even when shooting 4K video. For more intuitive control, the Mark IV’s LCD monitor will offer full touchscreen control, including AF area selection. [image:blog_post:61705]
Beyond autofocus, the Mark IV’s new 150,000-pixel RGB+IR metering sensor also promises to assist in the capture of high-quality images with precise exposure metering, flicker detection, scene recognition and face detection.
Aside from being the first camera in the 5D series to shoot 4K, the 5D mk IV also brings built-in Wi-Fi and NFC connectivity to the 5D lineup. In addition, the Mark IV will include a built-in GPS receiver with compass for accurate geo-tagging and auto-time syncing. The camera records to SD or CF card and uses Canon’s EF lens mount. [image:blog_post:61706]
Canon also announced two new L-series EF lenses – the Canon EF 16-35mm f/2.8L III USM Ultra-Wide Zoom Lens, available in late October for around $2,200, and the EF 24-105mm f/4L IS II USM Standard Zoom Lens, also available in October for around $1,100. [image:blog_post:61708][image:blog_post:61709]
The Canon 5D Mark IV is slated to be available in early September 2016 for around $3,500 for the body only. The camera will also be sold in kits with the EF24-70mm f/4L lens for $4,400 (available in September) or with the EF24-105mm f/4L IS II USM lens for $4,600 (available late October).
For more information, visit www.usa.canon.com/5D4Legend.