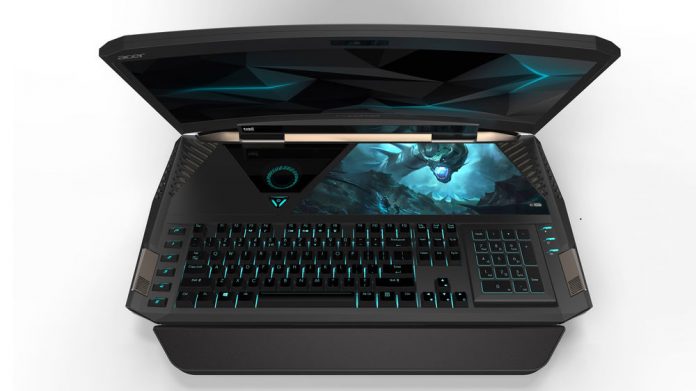 Over the past few years, curved screens have infiltrated both edit bays and living rooms around the world, and today at IFA Berlin 2016, Acer took the concept one step further with their introduction of the first mobile workstation to feature a curved screen — the Acer Predator 21X.
While curved screens are seen as a gimmick by some, fans praise the immersive experience such a form factor provides. The Predator 21X allows you to bring that experience wherever you go. This 21-inch screen offers a resolution of 2560 x 1080.[image:blog_post:61765]
Aside from the world-first display, the 21X houses some impressive hardware, including 7th Generation Intel Core processors, dual NVIDIA GTX 1080 GPUs running in SLI and a five-fan cooling system.
Conceived as a mobile gaming computer, the 21X is equipped with Acer’s new Eye Tracking Technology, which enables features like natural target selection, dynamic lighting and infinite screen, which will pan the camera view along with your eye movements, for a more intuitive gaming experience.[image:blog_post:61764]
Whether you’re a fan of the curved screen or not, the 21X promises to be a capable mobile workstation, ready to handle on-the-go post-production work and gaming. This Predator 21X will be available for pre-order later in 2016
To create an even more immersive experience, Acer has also partnered with Starbreeze AB to produce StarVR, a new virtual reality (VR) head-mounted display (HMD). The StarVR offers a 210-degree field of view — larger than that offered by most VR headsets currently on market — and will be a key piece in the forthcoming IMAX VR experience, launching in a series of pilot cities over the next year. [image:blog_post:61766]
IMAX VR will allow audiences to attend cinema quality VR experiences housed in specially-designed VR centers in much the same way we would attend a more traditional IMAX screening.
“We are looking forward to the launch of our first IMAX VR® center and pleased with the progress demonstrated by the initial shipment of StarVR® HMDs from Acer and Starbreeze, as this exciting industry continues to develop and grow," said Robert D. Lister, Chief Business Development Officer, IMAX Corp. “IMAX is committed to delivering immersive, multi-dimensional virtual reality experiences, featuring some of the world’s best entertainment and gaming properties, to premium locations, including multiplexes, malls and other commercial destinations.”
Also announced at IFA this year were a video monitoring system for pets called Pawbo and several new models in Acer’s Swift and Spin lineups, among other products. Additional new models in the Predator series were also introduced. For complete information, visit acer.com.