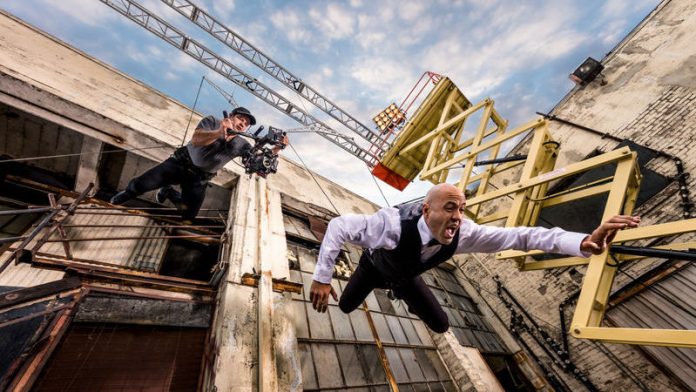 At NAB 2016, DJI announced the release of several new tools for filmmakers looking for smooth and stable images, including the DJI Ronin MX, the Matrice 600 aerial platform and the A3 series of flight controllers. Also announced is the availability of the Osmo RAW, which features DJI’s Zenmuse X5R camera.

Following the lightweight Ronin M announced at NAB 2015, the new DJI Ronin MX, brings even more functionality to the Ronin gimbal platform with only a modest increase in cost. With a maximum load of 4.5 kilograms, or nearly 10 pounds, the Ronin MX is capable of supporting a wide range of cameras from Arri, Blackmagic, Canon, Panasonic, RED, Sony, Nikon and others, and offer gimbal-tuning for various cameras for faster setup.
The Ronin MX is powered by a 4S Ronin-M battery, and third-party cameras mounted on the gimbal can be powered by an optional onboard DJI battery. The Ronin MX also features a built-in, independent IMU module, a Bluetooth module and a 2.4GHz receiver.
It operates through the DJI GO app and has settings for SmoothTrack and multiple shooting modes, including aerial, vehicle, underslung, upright and briefcase. The Ronin MX can rotate 360 degrees continuously when mounted to aircraft or vehicles and has been outfitted with an increase in tilt axis range from 90° straight down and beyond to 135 degrees. Apart from the M600, the Ronin MX is also compatible with video cranes.

Complementing the new Ronin MX gimbal, DJI also announced the Matrice 600, the next-generation aerial platform replacing the Spreading Wings series. The new platform integrates DJI’s new A3 flight controller and features Lightbridge 2 video-transmission technology for precise control and high frame rate HD live-streaming capability at distances up to five kilometers.
“The M600 is the most-powerful and easiest-to-use professional platform DJI has ever produced,” said Senior Product Manager Paul Pan. “We’ve pre-programmed all M600 platform data and information into the A3 flight controller, remote and transmission system to minimize setup and get you flying as quickly as possible.”
The six-rotor M600 can support a maximum payload of 6 kilograms or about 13 pounds, so in addition to the full range of Zenmuse gimbals, the  M600 is also capable of supporting the Ronin MX gimbal.
Six smart batteries power the M600 via a custom power management system and power distribution board, allowing users to switch on all batteries with one button and keeping the M600 flying if one battery fails. Flight times are estimated at between 16 minutes for heavier cameras and 36 minutes when flying with the Zenmuse X5.[image:blog_post:60180]
The systems all-new A3 flight controller uses sine-wave-driven speed controllers to ensure accurate, safe and efficient flight while self-adaptive flight optimizes the system based on different payloads. Upgrading the the A3 PRO systems brings advanced diagnostic algorithms that compare sensor data from three Global Navigation Satellite System (GNSS) units and three inertial measurement units, making the system positioning accurate to within a centimeter.
The M600 is also compatible with the DJI GO app to bring the pilot a live video feed, status details and other data during flight. The app also controls shutter speed, aperture and image capture on any Zenmuse X-series camera, with remote focus for X5 and X5R cameras.
The Ronin-MX’s CANBUS port allows flight controller data to pass through to the gimbal when mounted to the M600, and an optional accessory allows the Ronin-MX to transmit video real-time from a mounted camera, making full use of the M600’s Lightbridge 2 capabilities.
http://youtu.be/69OYV8dCN_w

Also introduced, the follow-up to DJI’s Osmo, is the Osmo RAW. The handheld stabilizer and camera combo uses the same technology DJI launched last month on the Inspire 1 RAW.
“When we launched the Osmo, we reimagined motion,” said Senior Product Manager Paul Pan. “With the DJI Osmo RAW, we’ve gone even further. Now, creators and filmmakers will no longer have to choose between image quality and image stability, no matter from what perspective they’re shooting.”
The X5R will attach to the Osmo handle via an adaptor and store video on a removable 512GB solid-state drive.

Available now, the M600’s retail price, including the integrated A3 flight controller with Lightbridge 2 and a full set of batteries, is $4,600. The Ronin MX retails for $1,600. Bundled with the M600 and integrated A3 flight controller and Lightbridge 2, it will sell for $6,000.
Pricing and availability of the Osmo Pro and Osmo RAW are yet to be announced.
Watch our Facebook Live video coverage from April 17th DJI press event here: www.facebook.com/VideomakerOnline/videos